It’s December in the Lakes area, which means many readers are preparing for the holiday season. Perhaps unbeknownst to many, Indiana — and the Lakes area specifically — is home to a surprising array of Christmas-related phenomena. 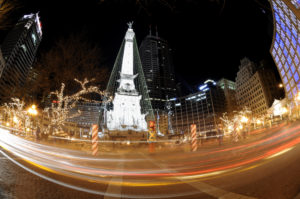 Let’s start with the ubiquitous Christmas tree. Indiana ranks 11th in the nation with 200 tree farms that produce almost 200,000 harvestable trees per year.

Nationally, 25 to 30 million real Christmas trees are sold every year (for each of these, one-to-three seedlings are planted the following spring), on nearly 15,000 farms that employ over 100,000 people full or part-time. A typical tree takes four to 15 years to grow, with an average growing time of seven years.

Indiana is also home to at least two major Christmas-related phenomena — one relating to a destination community and the other tied to a beloved Hollywood classic.

The Hoosier connections to the 1983 movie “A Christmas Story” run deeper than the contents of the movie itself. The late Jean Shepherd, a prolific writer and radio personality grew up in Hammond, Indiana, and incorporated his hometown into many of his stories, not least of all those that make up the movie itself (which utilizes his voice as narrator). It’s based on his short story, “In God We Trust; All Others Pay Cash.”

And while director Bob Clark had intended to film the production in Hammond, studio scouts chose the city of Cleveland, Ohio, as the filming location. This is slightly ironic since Shepherd grew up at 2907 Cleveland Street in Hammond.

Several real-life Hammond sites play at least a tangential role in the movie, including the childhood homes of Ralphie’s friends, Schwartz and Flick, his teacher Miss Ruth Shields, the (now defunct) Cam Lan Chinese restaurant and the defunct Goldblatt’s department store referred to as Higbee’s in the movie. Warren G. Harding Elementary, which has since been rebuilt, was also depicted in the movie.

Nearly at the opposite end of the state from Hammond is the small, yet legendary town of Santa Claud, Indiana. Rumor has it that in the mid-19th century, residents of the then tiny town originally chose the name Santa Fe for their community, only to discover that a Santa Fe, Indiana already existed. The night that news reached residents, says the legend, was Christmas Eve — the same night a boy rushed into the town meeting to proclaim that the Christmas star was falling. And, in fact, a flaming mass allegedly crashed into a distant hillside, leading to the conclusion that a Christmas miracle had occurred. The apparently obvious implication was that the town should be renamed Santa Claus. The post office bearing that moniker was officially established on May 21, 1856.

Many years later, around 1914, Santa Claus Postmaster James Martin began answering mail sent to jolly old Saint Nicholas, leading postal employees nationwide to reroute letters addressed to “Santa Claus” to the only town bearing that name…the one in Indiana. Eventually, the tradition took hold of individuals routing notes and packages through the Santa Claus post office so they would bear the authentic postmark of the gift-bearing Saint Nicholas.

On the other side of town, Chicago businessman Carl Barrett built a 22-foot statue of Santa Claus which served as the centerpiece of Santa Claus Park. All of this was the precursor to Santa Claus Land, which opened in 1946. As the first amusement park in the world with a specific theme, the park included a toy shop and related displays, a restaurant, themed rides, and of course, Santa himself.

Over the years the theme park became increasingly elaborate. In 1984, the park expanded to include Halloween and the Fourth of July and changed its name to Holiday World (known today Holiday World & Splashin’ Safari) and now welcomes over 1 million people each year.

Residents of Santa Claus, whose population has increased from around 100 people to 2,400 people, might live on Candy Cane Lane or Poinsettia Drive and visitors can stay at Santa’s Lodge or Lake Rudolph Campground. During the Christmas season, the town is home to a multitude of festivals, parades, and Christmas-themed fireworks.

About midway between Santa Claus and Hammond, another Christmas landmark holds court in downtown Indianapolis. The post-World War II brainchild of architect Edward D. Pierre, the Christmas tree at the Soldiers and Sailors Monument came to

fruition in 1962 when thousands of lights were strung from the base of the Lady Victory statue down 284 feet to the street below. These days, nearly 5,000 colored lights join more than two miles of garland in the downtown “circle” of the Hoosier state capitol.

The aptly named Circle of Lights was named, in fact, by Travelocity as one of the top five must-see Christmas trees in the US.

And so, the Lakes area — and the Hoosier state in general — may be a bit off the beaten path from the North Pole, but there’s plenty of significant Christmas-related history to be found here.