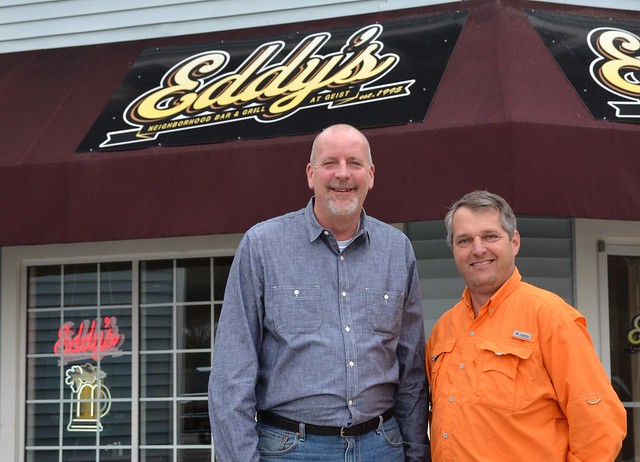 Eddy’s Neighborhood Bar and Grill is celebrating its 20th anniversary this year. Along with the anniversary celebration, the ownership of Eddy’s is changing hands. But no need for concern, the new owner is certainly no stranger to Eddy’s. Dave Stringer, known as the tall guy behind the bar, has been the manager of operations after Scott Foster purchased Eddy’s a little over eight years ago. Now he will take over as owner, as Foster and his wife plan to spend a little more time at their place in Florida.

“It’s fantastic,” says Stringer about his new position. “We’ve been talking about doing this for a while now and finally we just decided now is the time.” Often referred to as the “Cheers” bar of Geist, Stringer says things will remain pretty much the same as they have been, under his direction.

Chef Kyle Cambridge will continue whipping up some of Eddy’s favorites in the kitchen such as the jalapeno chicken strips and the popular Eddy’s dip.

A few more pasta dishes will be added for the winter menu as they have done in the past. Probably the biggest change is adding craft beers.

“The craft beers are so popular now,” says Stringer. “More than half of the beers on tap are craft beers, and I’m adding more canned craft beers too.”

The annual food drive spearheaded by Stringer for a downtown food pantry will continue, as well as the summer boatside delivery with the “crazy cart.” Also topping the list, the annual support of the Fourth of July Geist fireworks display will continue.

“It’s my entire advertising budget for the year,” laughs Stringer. “But that’s the way it’s been. Eddy’s doesn’t do coupons or anything, we just let everyone know we are still here once a year by supporting the fireworks.” And that strategy may work for them since as of now, 80 percent of their clientele lives within 5 miles of the neighborhood bar and grill. Eddy’s is located at 11693 Fall Creek Road.