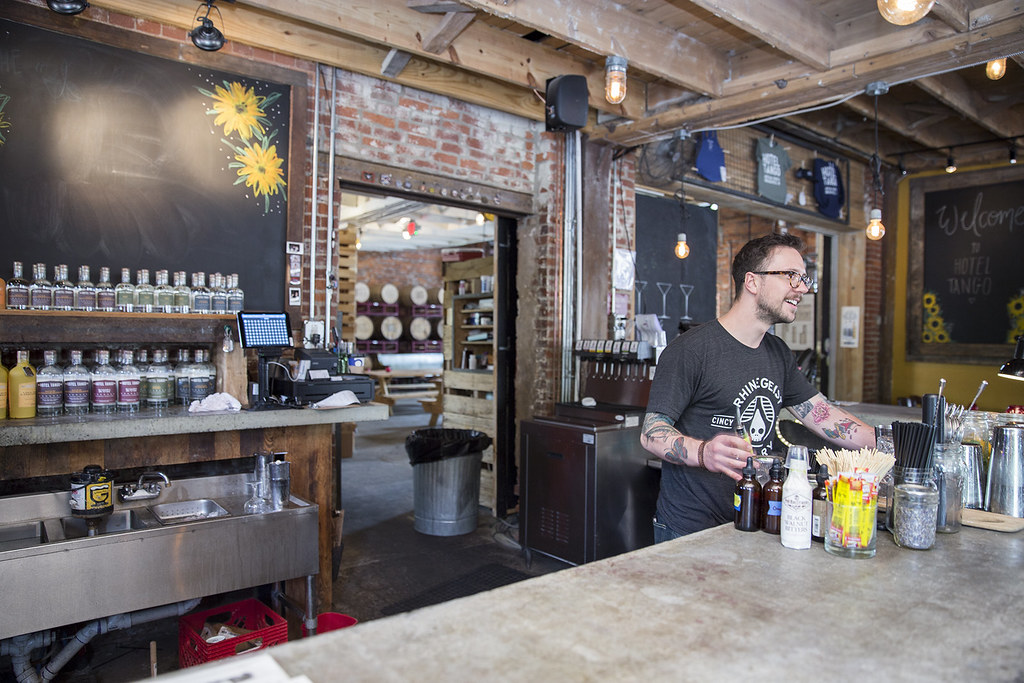 Hotel Tango is the first artisan distillery in Indianapolis, located along Virginia Avenue in Fletcher Place. It’s also the first craft distillery that is service-disabled veteran-owned in the United States, and they have several employees with military experience.

The name is derived from the International Radiotelephony Spelling Alphabet, commonly known as the NATO phonetic alphabet, honoring Hilary and Travis Barnes’ first names. “Each of our liquors is named using the military alphabet, and ‘whiskey’ is the word for W, so that name does not have a NATO word in front of it, like Romeo Rum or Victor Vodka. It’s just Whiskey,” shares Travis. 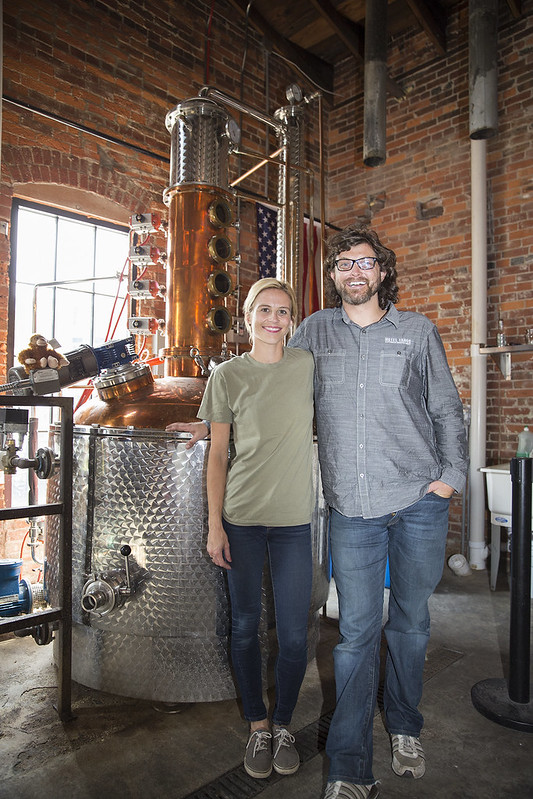 Travis and Hilary met as students at the IU Robert H. McKinney School of Law. At that time, Hilary was working on earning her pilot’s license. She grew up in Indianapolis, graduated from Lawrence Central High School and attended IU Bloomington followed by law school. Her father is an avid pilot, and Hilary developed a love of flying at a young age.

Travis grew up Albion, Indiana, near Fort Wayne. He interrupted his undergrad education at IPFW to enlist in the Marines. Travis served three tours with the First Recon division as one of the first teams into Iraq via Kuwait in 2003, entering Fallujah. His other tours included Ramadi in 2004, and he saw more action in 2006.

After serving with the Marine Corps, Travis completed his undergraduate degree while earning his pilot’s license. He then moved to Indianapolis for law school. During a weekday, Hilary was scheduled to maker her first solo cross-country flight, which consisted of flying from Indianapolis Regional Airport to Bloomington, then on to Terre Haute with a return flight back to Indy Regional. Her flight into Bloomington was smooth, the take off from Bloomington to Terre Haute was uneventful and then something happened. All of her instruments started going down. Hilary squawked the emergency code for “lost all electrical.” “I kept muttering a prayer of ‘please don’t let me end up on the news,” says Hilary of the tense flight.

“I made a joke about ‘If I don’t show up in class’ on Wednesday,” shares Hilary, who walked into class half an hour late with the blood drained out of her face. She knew if she had not gotten back up in the air behind the controls that same day, she may not have flown again. Due to the need to complete her cross-country solo flight, another plane was flown out to her to fly.

Travis and Hilary married in August 2012. During the following summer, Travis became proficient with distilling alcohol. The idea of opening a distillery was tossed around. In 2013, a short window of opportunity for an Indiana state artisan distiller’s permit, which allowed for craft spirit manufacturers to sell directly to consumers, opened.

Law school became the vehicle they needed, for their skill set helped greatly in filling out the necessary forms. They took advantage of the opportunistic window of 180 days to file the permit without excessive fees. Travis, Hilary and a couple of their law school friends spent much of their first semester of their third year of law school writing the application to open an artisan distillery while also studying for the bar (which, in this case, sounds like a double entendre). Their permit was granted around Thanksgiving 2013.

Invited to a private scotch tasting inside the exclusive University Club, Travis shared a sampling of what he had been making in the backyard. The evening turned into a mini “Shark Tank” event with four of those in attendance becoming initial investors. Hotel Tango opened in September 2014, 10 months after receiving their official operational license with the State.

The building that is now Hotel Tango along Virginia Avenue had been boarded up for nearly 30 years. Keeping much of the integrity of the building construction as possible, Hilary, Travis and their team got to work stripping layers of paint off the walls and cleaning out every inch of the facility. 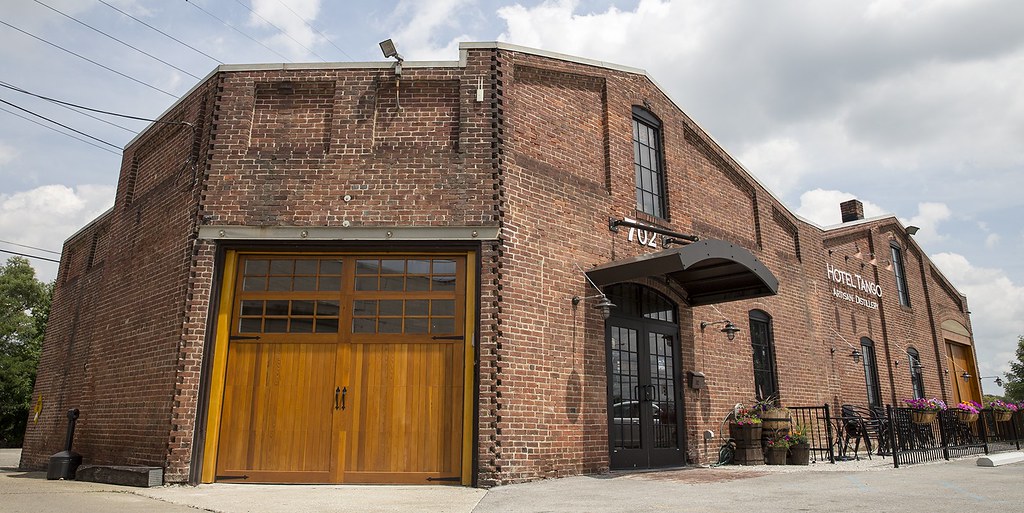 Lead paint was removed from windows, allowing light to enter. Hilary researched the building’s history and discovered it was built by Henry C. Vehling in 1906. An area for horse stables and carriages was in the back of the building with a hayloft upstairs. The front originally served as a funeral parlor.

Original construction elements such as exposed beams and brick complement the decor. The crowd is eclectic, and there’s Wi-Fi, so the vibe feels more like a coffeehouse with adult beverages. Due to area laws for business hours, Hotel Tango operates daily from 2-10 p.m. with patrons able to purchase bottles for carryout every day of the week.

The finishing processes creates a variety of bottled liquors, including Victor Vodka, Mike Moonshine, Lima Charlie Limoncello, Romeo Rum, Golf Gin and Oscar Charlie Orangecello. Once out of the barrel, the craft liquor is bottled, labeled and boxed up to sell. Currently, Hotel Tango spirits are available for purchase in 300 locations across Indiana, Kentucky, Ohio and Michigan.

Hotel Tango has yet to release its Whiskey, which is currently in barrels. “When it’s ready, it’s ready,” says Travis, who indicates that the aging process for whiskey bourbon is a matter of personal preference. 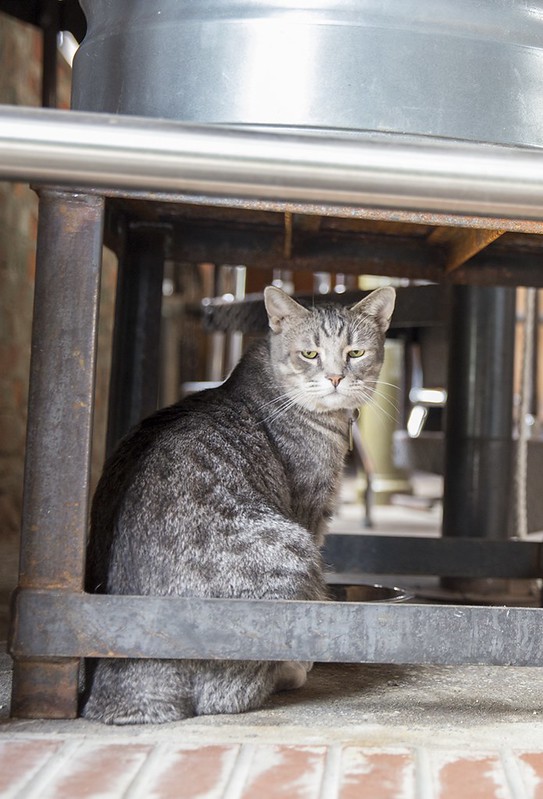 In keeping with distillery traditions, Hotel Tango has a distillery cat named Fletcher. The most famous distillery cat is linked to the Glenturret distillery in Scotland where a statue was erected to celebrate Towser the Mouser. Towser is in the Guinness Book of World Records, credited with killing 28,899 mice. Fletcher keeps the grain well protected and socializes with the patrons on occasion. No word on how many kills Fletcher has racked up thus far, and he may have a co-worker soon. Hotel Tango is opening up a second facility with expanded production off 16th Street and the Monon.

“We will have event space at the new location,” says Travis. “The new building can accommodate more people and more parking and has a great view of downtown.” Their second location is scheduled to be open and operational by the end of this year. “We Serve All,” adds Travis. “Except anyone under age, naturally.”

For additional proof, visit their website, hoteltangowhiskey.com, or in person at 702 Virginia Ave., Indianapolis, in the Fletcher Place neighborhood.

The Pint Cycle: Pedaling Toward Success