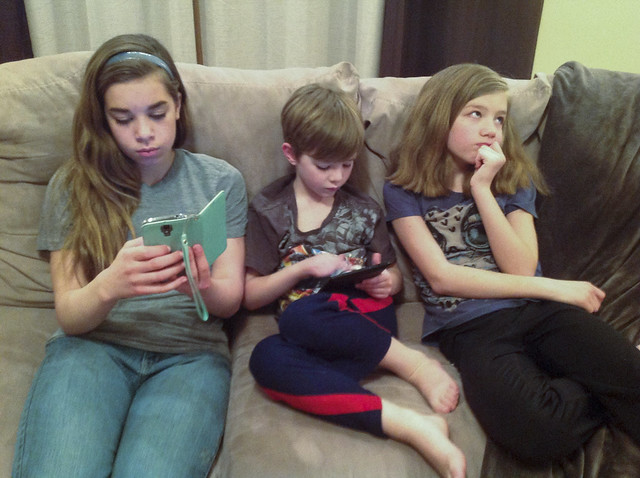 “Mom, I’m bored.” That statement is like nails on a chalkboard to me. Usually the complaint is announced by my 5-year-old son when we are running errands or at one of his sister’s practices or shows. I plead guilty of handing him my phone or iPad. My tolerance for this whining is low. In addition, I feel sorry for him; he’s bored.

I confess at times that I engage in my iPad to fight boredom. Therein lays the question: Do we need to be constantly stimulating our brains with our devices? Should we let ourselves get bored and space out from time to time?

Researchers are studying the cognitive effects of boredom and mind wandering. What they found so far – Boredom Leads to More Creativity!

Constant stimulation does not allow for creative thought. Spacing-out (mind wandering) or daydreaming gives the brain much needed downtime. A brain on idle allows conscious and subconscious thoughts to kick in. This leads to sprouting of original ideas that fuel the creative juices.

The More You Use It-You Lose It!

It is common to walk into a waiting room or restaurant and see several people looking down at their phones checking Twitter and Facebook. I don’t blame them. I think people feel pressure to keep up with social media posts (or defending their Clash of Clans base).

I grew up in the pre-cellphone, pre-Internet era where daydreaming or spacing out was a daily occurrence. As an American, I also grew up with the idea that daydreaming or spacing out is an unproductive act. One should spend time more wisely, doing something. Therefore, when the BlackBerry was released in 2003, it is not surprising that Americans hitched on so quickly. Now you have the world right in your pocket! With the 2007 release of the touch-screen iPhone, the smartphone market exploded.

Manoush Zomorodi, host of the WNYC podcast “New Tech City,” recently launched a project coined “Bored and Brilliant: The Art of Spacing Out.” She challenges participates to put down their phones and become bored once a day. First participants are instructed how to become “bored” and then given a challenge, such as construct your dream home out of stuff from your wallet.

What they found from 18,000 participantes was stunning. The participants’ reactions:

Many found it challenging to put down their phone. It was very hard and some described having a “withdrawal” effect. In the end, most felt more satisfied in their lives and will continue to limit their usage.

Remember to allow time to just THINK without being entertained by your device. This will help you connect – back to yourself.

Of course, there’s an app for that. Called “Moment,” it tracks how often you check your phone and usage time. The suggested limit is 30 to 95 minutes a day.

Dr. L. Rosen, a research psychologist, suggests children use a 1:5 ratio. Balance every 1 minute of screen time with 5 minutes of non-tech activities. For example, in an hour that’s 10 minutes on the iPad and 50 minutes of other activities. In teens, technology becomes more important for schoolwork and social life so the ratio flips to 5:1.

Now when I hear “Mom, I’m bored,” I respond, “That’s great! Now you have the Opportunity To Exercise Creativity. It’s O-TEC time!”  This little acronym nugget came from my boredom. Brilliant, huh? Maybe I should stick to my phone.

Girls About Town: Fun Without the Sun