Jenna Kryder has been dancing since she was 3.

The 17-year-old junior at Center Grove High School is watching her dreams become a reality as more and more opportunities come her way, following years of hard work. 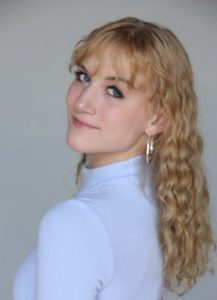 For the third year in a row, Jenna is one of the few teens accepted as dancers for the annual Indianapolis Symphony Orchestra AES Indiana “Yuletide Celebration” this winter.

The family tradition has been ongoing for 36 years and features a variety of talent.

This year Frankie Moreno will return as host, and the show promises traditional as well as new performances, such as the Kenyan singing group Moipei.

Jenna’s position on the “Yuletide” stage has been a long time coming, and is well-deserved.

“I moved to the Expressenz Dance Center in Carmel when I was 7 and they are very versatile in training,” Jenna says. “I’ve done jazz, tap, modern, hip-hop, ballet, ballroom and contemporary. Training at Expressenz has given me many opportunities.”

She isn’t new to performing on stage. She’s had the opportunity to perform for “America’s Got Talent,” “World of Dance,” Dance Kaleidoscope and numerous competitions.

“There’s nothing exactly like ‘Yuletide,’” Jenna says. “I think it’s very similar to a Broadway stage. It’s a live audience, a different audience every night, and my first professional job.”

Mary, Jenna’s mother, loves to see her daughter on a stage.

“It’s thrilling,” she says. “We’re so very proud of her and I can’t take my eyes off of her. She’s blessed to be able to do it and I love seeing how happy she is onstage. She’s quite a performer and it’s really fun to watch.”

Rehearsals began in early November, and a total of 28 performances throughout December will showcase Jenna’s skill, in the Holly Jolly Dollies scene and Santa’s tap-dancing number among others.

“I think the people are just incredible,” Jenna says. “You get to watch adults in the entertainment industry, and work with the director and choreographer. It’s really unique. I don’t know of another symphony that puts on a show like this and everyone is so kind. I’m learning so much.”

Mary loves the experience her daughter is gaining throughout the process.

“She really thrives on getting to know the whole cast and there’s such a nice camaraderie between all the people in the show,” Mary says. “I was able to come with her the first year for the costume fitting, and just watching everyone work, they were so professional. It was a big wake-up moment to see what a truly professional show she was joining.” The audience participation is an influence as well.

According to Indianapolis Symphony Orchestra officials, more than 400 families in the Indianapolis area have attended a performance for 10 years in a row.

Parents bring their children for the first time, couples make it a date night, and still others attend for the very first time.

“We can see the audience, see their faces and their reactions,” Jenna says. “It really feeds the atmosphere in the room. It’s such a unique experience.”

In order to audition and receive a part in something as prestigious as “Yuletide,” the work behind it may surprise some.

Jenna calls dance a “spart” – a mix between sport and art. It requires flexibility, strength, stamina and creativity.

“There’s a very demanding schedule,” she says. “I attend school full time and also dance 25 to 30 hours per week. It is super hard. You don’t get much sleep and it’s a repetitive schedule. It pays off in moments onstage. I think dancing is so cool and I love that you can improvise. You can create anything – no limits. That helps me with burnout and when things get intense.”

Though Jenna’s training schedule doesn’t allow for much else, she joined the Center Grove Surround Sound show choir this year and hopes to get involved in musical theater in the future.

Ultimately, the dream is Broadway.

“I’d love to be on Broadway or in the dance industry in some way,” Jenna says. “There are other dance opportunities out there like cruise ships and commercial. It’s a long process of auditioning and taking classes, but I’m definitely looking into the musical theater route and definitely plan on going to college first.”

Through Expressenz, Jenna has also had the opportunity to learn more about choreography – a skill she’s gained an appreciation for and enjoys.

“It’s really a difficult thing – a process,” she says. “I’ve been attending an intensive class and I’ve gained some confidence in that area.” Despite the challenges and intense work schedule, Jenna knows she doesn’t want to do anything else.

“I love performing and being on stage,” she says. “I love to make people happy through dance. It’s just unmatched.”

The “Yuletide Celebration” shows will run from December 2 through 23. Tickets are on sale now at indianapolissymphony.org.