It was a barren field, a six-acre plot of land across from Riverview Hospital, that lies just west of Noblesville’s downtown square. In the heart of a once bustling district known as Federal Hill, home to a school, a popular ice cream shop and more, the plot of land had become an empty floodplain, that was quickly becoming an eyesore.

That is, until Mayor John Ditslear and his administration took a closer look and realized the endless possibilities for developing the area. Ditslear had a vision to take the historic downtown area and expand it to the west. The Mayor wanted to take so-called “developmentally challenged real estate” and create a gateway to the to the west.

So in 2014, the Mayor took his initiative to the Noblesville Parks and Recreation staff. Three years later, with the help of a whole team involved on the project and plenty of input from Noblesville residents, they came up with a space that was nothing short of spectacular and definitely something Noblesville residents can be proud of for generations to come.

Complete with an expansive amphitheater, a gathering space, a playground/park and more, the Federal Hill Commons offers a place to hold large events, concerts, a Farmers Market and more.

Brandon Bennett, Director at Noblesville Parks and Recreation and project lead for FHC, reflects on the project that was three years in the making.

“We needed to create something that would become a living, breathing heartbeat, an economic incubator to this side of the river,” Bennett says. “The cool thing about Noblesville is that we didn’t have to create the historic charm. It was already there. We took care to keep that small-town feel.”

The team indeed took great care to plan every aspect of every feature, right down to the built-in instruments on the amphitheater stage, the colorful replica of Indiana’s Bicentennial Bison and the bright, multi-colored lounge chairs.

“We spent over a year on the design of it, listening to plenty of input from residents,” Bennett says. “The construction, headed up by Myers Construction Management, took about a year and a half. Ultimately, we gave the residents what they asked for.”

For Bennett, the unveiling of the Federal Hill Commons means more than the culmination of a three-year project. Bennett was born and raised in the Noblesville area. Like many teens, he became restless during high school and college, often lamenting how he couldn’t wait to graduate from college so he could move away. But after earning his degree in Leisure Studies at Purdue and heading to Florida for an internship, he changed his mind.

“I realized what a great community Noblesville is, and I’m here to stay,” he says.

Now a nineteen-year veteran with Noblesville Parks and Recreation, the Federal Hill project was Bennett’s first major project to build and manage.

“We wanted a wow factor and we got it,” Bennett says.

The Noblesville community celebrated the Grand Opening on May 12-13. The opening weekend kicked off Friday with a post Cinco de Mayo celebration, Salsa for Salsa.

Saturday May 13, Federal Hill Commons kicked off the first of its weekly Farmer’s Market on the Market Plaza area. The Farmer’s Market will be offered every Saturday through mid-October. Now that the Grand Opening has passed, it’s on to a whole summer full of great events planned for the Commons. Among the highlights is Return of the Mac, Saturday June 3 from 2 p.m. to 5 p.m. This annual, ultimate noodle fest, which travels to different venues each year, leaves every Mac and Cheese lover in an ooey gooey pasta and cheese coma for a long time to come.

This year organizers were looking for a Hamilton County venue that could hold at least 1,000 people, and Federal Hill Commons was the perfect choice. One ticket price lets you sample an unlimited number of macaroni and cheese concoctions from a selection of chefs representing a variety of suburban Indianapolis area restaurants. Check out returnofthemacfest.com for more details.

Federal Hill’s Tribute Series Concerts will be held directly after Return of the Mac.  16 Candles, a Chicago-based band will keep you dancing with their entire lineup of 80’s hits.

Also on the First Merchants stage are several other concerts in the Tribute Series lineup. In addition to the 16 Candles concert, Classic Rock Experience plays in July, Jai Baker in August and Separate Ways from Fishers’ School of Rock.

In addition to the music programming, Noblesville Parks and Recreation has heard from fans of the arts, and they’ve planned two Shakespeare in the Park performances.

Though the dust on the Federal Hill Commons project is still settling, Bennett says there is more to come.

The work ahead includes plans to make the Commons into a year-round venue. He says plans are in the works to turn the Market Plaza into a skating rink. Adding sculptured art is on the list, as well as creating a giant story wall detailing the history of Noblesville.

The Federal Hill Commons main office, the former First Merchants Bank, will be used as a banquet hall venue for weddings and other celebrations. The giant folding doors of the building open up to a spacious patio overlooking the entire amphitheater area making it a perfect spot for your special occasion.

Bennett says events will constantly be added to the schedule, so don’t miss out. Be sure to go on to Noblesvilleparks.org to get the latest information on the schedule of events, ticket prices and more. 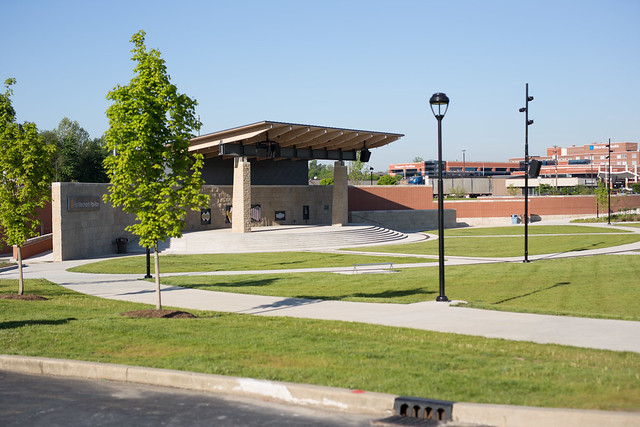