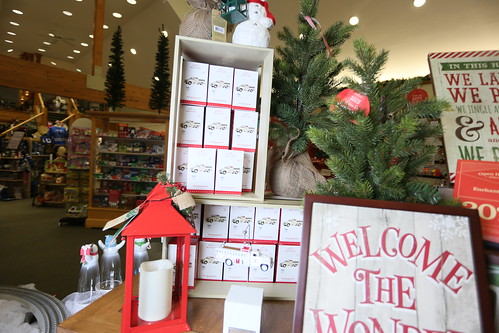 Each year, Hallmark rolls out more than 300 ornaments that honor everything from pop culture icons to NFL stars and baby’s first Christmas. If you can dream up something you’d like to hang on your tree, chances are Hallmark has fashioned it into a Keepsake Collection ornament. But even if your ornaments of choice run to treasured hand-me-downs and homemade, you’ll want to reserve a branch on your tree for a special newcomer this year: a mini-replica of Greenwood’s very own vintage fire truck sold at Hallmark stores for $19.95.

“[Hallmark] was really impressed that the truck had so much history with the community and was in such outstanding shape,” Sipes says. Emails and photos flew back and forth between the fire department and Hallmark for over a year with Hallmark’s artist requesting shots of the truck from different angles throughout the design process. “Hallmark made the ornament exactly as the trucks sits,” says Sipes. He finally saw the finished product in April when Hallmark sent complementary ornaments to the fire department.

The ornament was unveiled in July at Hallmark stores nationwide; locally, eight retired Greenwood firefighters posed for photos alongside the real truck at Teresa’s Hallmark, and the 200 fire truck ornaments available sold out. “We had to call Hallmark and ask them to do another run of them,” says owner Teresa Dillard.

There’s no word on how many of the ornaments have sold at other Hallmark stores (Indy has six), but with the little white truck being sold in Hallmarks all over the world and featured on page 83 of Hallmark’s Keepsake Ornaments Dream Book, the pride of the Greenwood Fire Department is getting plenty of publicity. “We’re very proud of the fact that our truck is representing Greenwood,” Sipes says. 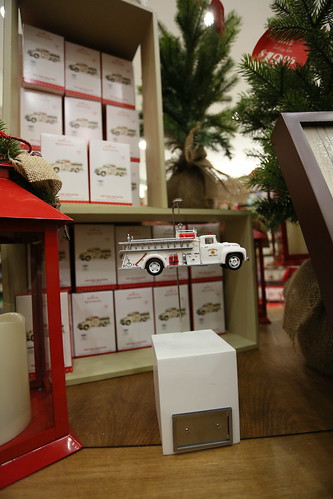 While the truck looks like it just rolled off the assembly line, it’s still nearly 60 years old. So when Dillard heard retired firefighters discussing maintenance of the truck, she saw interest in the ornament as an opportunity to do the Fire Department a good turn.

This is not the first time Dillard has given back to Greenwood’s service members: On September 11, Dillard dedicated 9.11 percent of the day’s sales to the police department, which was used to purchase two bulletproof vests. Now Dillard will give 91.1 cents to the fire department for each truck ornament purchased at the store.

“I thought it would only be the firemen who wanted the ornaments,” Dillard says, “but people who just lived around Greenwood wanted them too. Then family members came, saying, ‘My dad, my uncle…rode on that truck.’”

Sipes has also heard from locals who are enjoying the little token of hometown history. Like all of Hallmark’s Keepsake Ornaments, the truck will only be sold this year; once it is gone, it is gone. Nevertheless, for the community, 2015 will always be the year that the little fire truck became a collector’s item.

“We’re very excited that the community is as excited as we are,” Sipes says. “Greenwood now has this incredible recognition, thanks to Hallmark.”