The Red Line: A Transportation Alternative

A faster, more efficient bus system is coming to Greenwood, and the city is going to ask for taxpayers’ support. The Red Line is part of a rapid bus transit system connecting Greenwood to Hamilton County. With a 35-mile route that runs through the city of Indianapolis into Westfield and Carmel, the bus system is expected to bolster economic development, enhance the quality of life in these areas and support a labor force in need of transportation.

Greenwood isn’t expected to see the Red Line for another five years, but voters will be able to decide on the value of the project when a referendum is placed on the 2016 ballot. The project is a partnership between the municipals and IndyGo and is touted by the city, Greenwood Chamber and Johnson County Development Corporation as an important component to the city’s future and revitalization.

As a major player in the revitalization of Greenwood, Mayor Mark Myers has been involved in the process as well. “Government officials need to look at the future here,” he said. “Younger generations are eco-friendlier and less dependent on having their own vehicles.”

Ease of transportation is key to the bus line’s success. Although Greenwood won’t undergo major changes to its roadway, in the Indianapolis area, the bus line will travel down its own exclusive lane. This cuts down on traffic even though the bus will stop at stations about every half-mile. During a 20-hour period, buses are expected to be available every 10 minutes. A ticket taker will also collect tickets as the bus is in motion. Stations in Greenwood are envisioned, but not set, for the Greenwood Park Mall, County Line and Madison Avenue, and Smith Valley Road and Madison Avenue.

Entrepreneur and President of Express Employment Professionals Mike Heffner will be at the end of the line. And since his job is to connect employers with potential employees, he has yet to be convinced that it will provide adequate transportation for Greenwood workers. 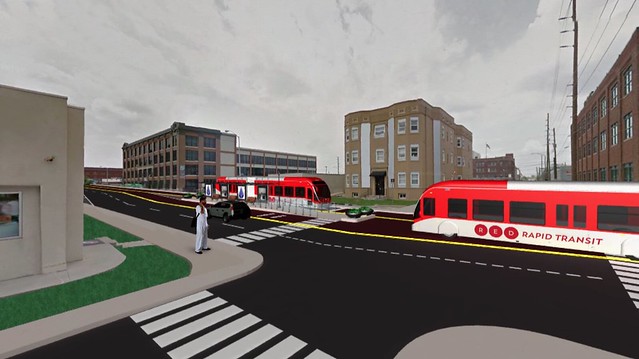 Heffner noted that a great deal of jobs fall along Emerson Avenue and Graham Road.

“I’m wondering if they need to bring that route to Emerson Avenue instead of Madison Avenue,” Heffner said. “A lot of retail jobs are at the mall, but I also believe there are a lot of warehouse and manufacturing employers that would benefit as well.”

Greenwood Chamber of Commerce Executive Director Christian Maslowski has confidence that the Red Line will connect both consumers and employees to businesses.

“Truth be told, employers identified employees in other parts [of Central Indiana],” he said. “The road goes both ways.”

And with one of the lowest unemployment rates – just under four percent – Johnson County could stand to increase its pool of job applicants.

For Myers, the bus line isn’t just about connecting Greenwood to the metro area; it’s about becoming part of the metro area. He notes that other major cities have substantial transportation systems including bus routes that make sense. Cities like Seattle and even Cleveland have benefited from regional transit. Cleveland’s Health Line bus rapid transit helped bring nearly $5.8 million in economic activity since 2008.

Part of a bigger transit system called Indy Connect, the Red Line is the north/south motorway expected to put Indiana on the regional transit map. IndyGo, Central Indiana municipals and other local organizations will be working together to make Indy Connect a reality in the future.

Red Line is expected to be one of five rapid bus transit systems throughout Central Indiana. Until then, government officials are going to allow taxpayers to connect the dots and decide if rapid transportation is a viable option for Greenwood.

“At the end of the day,” Mayor Myers said, “it’s up to the voters to decide if they support this or not.”