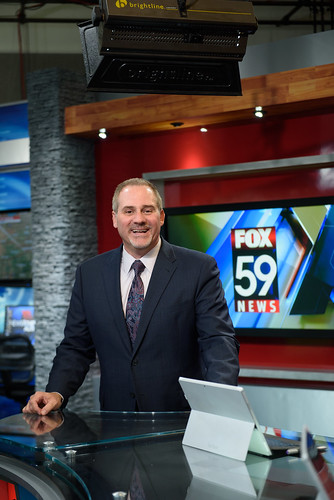 Anyone who watches Fox59 Chief Meteorologist Brian Wilkes knows his forecasts have just as much energy as the polar vortex he describes. As Fox59’s and Indy’s first weatherman to introduce the “Long Ranger” forecast (complete with the Lone Ranger theme song added as sound effects), Wilkes is an enigma as unpredictable as his weather patterns. But spend an afternoon with the king of jet streams, and you’ll see his Long Ranger forecast isn’t the only thing unique and special about him.

Entering his Geist home, Brian and his wife of seven years, Gigi, are warm and accommodating. As they begin to show off the gorgeous home they bought in August 2014, their two canine children, Olive and Monkey (aka Coach Monkey Bear), greet us and demand our attention as if they are the subject of the story. “We got Monkey to keep Gigi company since I work nights. Then we just had to get Monkey a pal.” Wilkes admits he can often be found on the family room floor wrestling with his beloved bulldogs.

Wilkes ushers us in, and we sit down in the tastefully decorated kitchen overlooking a wooded backyard providing a spectacular view, reflective of Brian’s love of nature. As Brian gets seated, his positive, energetic personality shines through from the start. He leads off taking us right back to the beginning.

Surrounded by family in law enforcement (a father who was a United States Marshal who served under four governors and a brother and sister who are prosecutors), Wilkes instead took a different path. It all started with the blizzard of 1978 when he was just 10 years old, Wilkes says. Inspired by the weather forecasts on the radio and television, he says he set up a radio in his basement next to his train set and mimicked the weather forecasters.

“I spent a lot of time with my grandmother,” Wilkes recalls. “Mom was recovering from a massive stroke, and Dad was traveling, so my grandmother essentially raised me during that time.” It was his grandmother who often told Wilkes old wives’ tales about how to know a storm is coming.

“She’d say things like she could tell if a storm is coming by the aches in her knees,“ he says. So he decided he could learn to predict the weather, and he did. 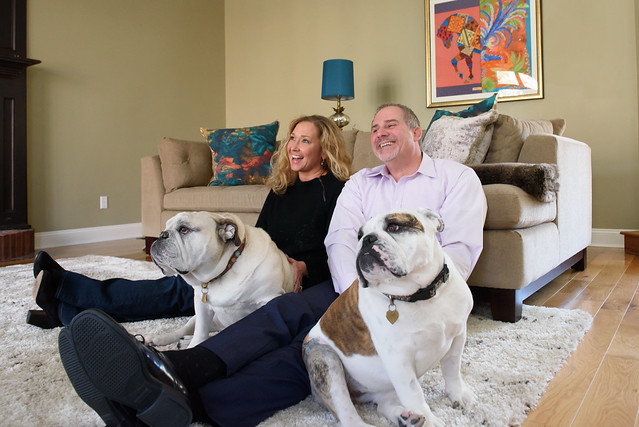 While attending school at Chicago’s Columbia College, he and his ex-football buddies often worked security for his father’s company to make a little extra cash. It was while Wilkes was on one of his security detail assignments that he ran into a WGN television personality he recognized from the news. After a brief chat, he convinced the news lady he’d be a great fit for an internship at the station. She contacted her colleague, meteorologist Tom Skilling, right away, and Wilkes got the job.

It was under Skilling that Wilkes learned to make weather predictions the old fashioned way, by hand. He says in the absence of computers that would do it for him, Wilkes made the calculations himself, using maps, air pressure values and the like. After two and a half years under Skilling, Wilkes moved on to Elkhart, Indiana, and his first official job as Chief Meteorologist with WSJV-TV, now the Fox affiliate.

Wilkes flexed his air mass muscle at WSJV-TV for a couple of years, and a new skill emerged from his toolkit. Wilkes flashes a sly grin as he explains how he can recall exact dates of weather emergencies. One such date that stuck in Wilkes’ mind was the deadliest day in Indiana, the Palm Sunday tornados of April 11, 1965. Though the devastation ripped through Indiana before Wilkes was born, he wrote, produced and hosted a documentary on the historic storm.

His eyes light up, and his memory is sharp as he continues to rattle off dates like the tornados of September 20, 2002, the tornadoes of race day May 2004, the tornados of 2012 in Henryville, Indiana, and of course the brutal windstorm of August 2011 that ripped through Indianapolis and took the lives of concertgoers at the Indiana State Fair. “Who could forget the storms of November 17, 2013? Over 50 tornados tore through the state,” Wilkes adds. 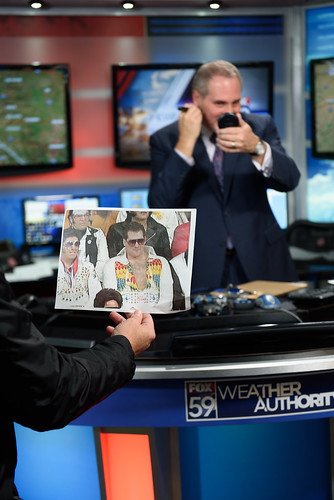 Like those same powerful storms, Wilkes blew in to Indianapolis from Elkhart in July 1995. He remembers the weather when he arrived in Indianapolis in 1995. “It was hot and humid, one of the hottest summers on record with a string of 90 plus degree days. The nasty heat wave caused over 700 deaths in Chicago.”

Chicago born and bred, one might not expect Wilkes to be so impressed with the Circle City, but he was hooked from the very beginning. “My first impression was White Castle! And the view from my hotel room overlooking Monument Circle? Awesome, baby,” Wilkes recalls. Now after 20 years in the community, he still loves it just as much. “I love everything about Indy. I came from Chicago, but I have no reason to say I hope someday I make it to the big market of Chicago,” he says.

Not only does Wilkes delight Indianapolis viewers with his dynamic personality, he also loves sharing his passion for weather with children. “I love teaching weather in the classroom, making them smile and entertaining them.” He definitely entertains.

A self-proclaimed class clown, Wilkes says he loves making people laugh, and he loves to sing. “I love to sing. I love jazz and really all kinds of music,” he admits. “Sinatra is one of my favorites.”

Elvis is another of Wilkes’ favorites. Wilkes tells a story of a time when he and his buddies decided to go to Toys ‘R’ Us to buy Elvis costumes. Somehow the comical costume turned in to something much more than Wilkes expected. “All of the sudden, I was asked to do Elvis impersonations for various occasions, even at weddings. At one point, Oprah was doing a show on Elvis impersonators, and my sister called in to the show and told them about me. I wound up on the ‘Oprah’ show,” he says.

Viewers may not have seen Wilkes’ Elvis impersonations, but his talents did not remain hidden. “One year, we put together a show called the ‘Brian Wilkes Singing and Swinging Holiday Special.’ It was a lot of fun. Someone probably has the lost video of it somewhere,” he laughs.

We take our weather party to the brand new state of the art Tribune news station. As I get caught up in more entertaining stories, I almost forget how seriously he takes the weather. He shows me maps and becomes transfixed in his weather world as he explains that his favorite forecast model is the European model because it provides data for over a week out. 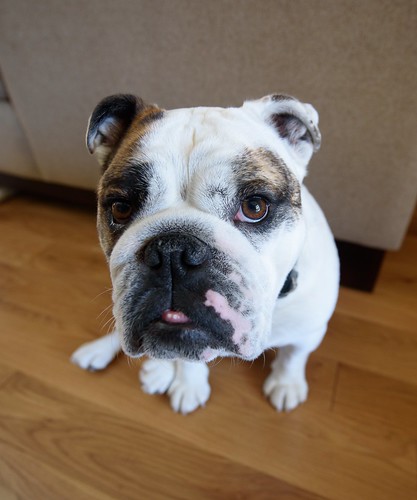 “That’s where the Long Ranger forecasts started. I did it because I knew it was possible,” he adds. “Technology is always advancing. We’re able to get more and more accurate with the sophisticated radars. But I’m always going to start by doing the calculations by hand with maps and data that involves a process of over two trillion mathematical equations. I use that data to make my forecast as accurate as possible.”

Whatever formula Wilkes is using is working better than any Doppler radar ever could. “When I arrived in 1995, Fox59 had a single half-hour broadcast. Now we’re on the air almost constantly, and we’re the number two station news-wise,” Wilkes says proudly.

As the forecast for Wilkes’ future calls for abundant sunshine, and he makes his mark on Indianapolis weatherman history, I try to imagine how he might be remembered against the likes of Swoop McClain and Bob Gregory. “I’m sure I’ll be remembered for being the Long Ranger. But what I hope to leave with the kids I teach is that anything is possible. You can make your dreams happen when you work hard enough.”

Wilkes is definitely proof of that. You can see Wilkes weeknights on Fox59 starting at 4 p.m.

Suzanne Huntzinger has a journalism degree from IU and has lived in the Geist community for 18 years.