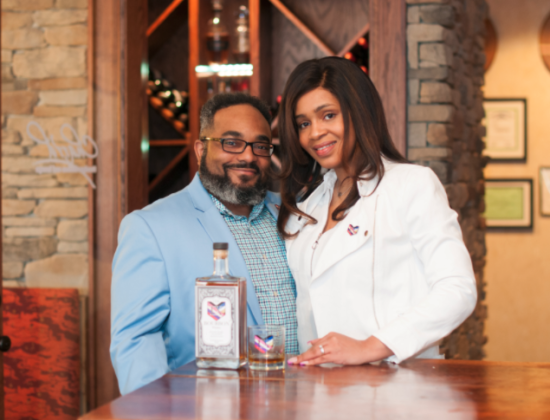 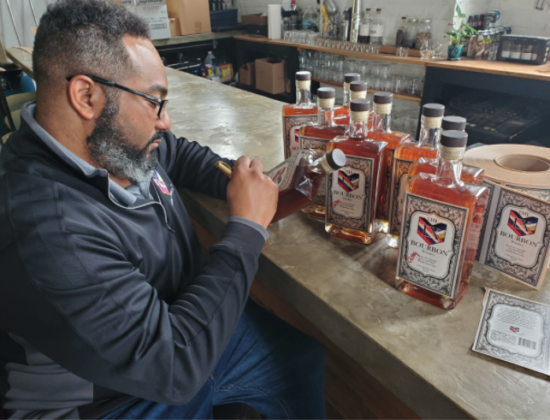 Be the first one to rate! Submit Review
Post Views: 1,515 When many out-of-staters think of Kentucky, three things likely come to mind: Derby, Muhammad Ali and bourbon. Bourbon stands out most to James and Brittany Penny, two Kentucky natives who met in the early 90s through a program called NSBE Jr. (National Society of Black Engineers).

Twelve-year-old Brittany told seventeen-year-old James that they were going to get married. He laughed it off as cute, but nothing to put stock in. As fate would have it they reconnected years later, and after 15 years of friendship they were wed.

Together they formed 2 Cents Inc. – a clever play on their last name. It is company that puts out their signature drink, The IX Bourbon. When asked why they decided to create a new bourbon, the answer is simple and direct: “We love bourbon.”

The idea came while being new parents. Their baby, who was 3 months old at the time, was keeping them up at all hours of the night. They got to talking one night, and after a few more conversations the idea was born. Pre-pandemic, they were throwing parties anyway, and they took pride in their signature cocktails, so they figured they should take it a step further. They love bourbon so much, that they carefully selected nine barrels. With care and precision, they blended the barrels together to make their own unique spirit.

This was a more sound and economical decision than distilling their own bourbon, which would have been a huge capital expenditure.

“There’s a potential problem if you don’t get a master distiller right out of the gate, and you don’t have a lot of capital, and you end up with a particularly younger tasting spirit,” James says. “Both of us being from Kentucky, bourbon is something we didn’t want to get wrong on our first attempt. So, we sourced some outstanding bourbon, blended it together, and came up with this very, very smooth and unique flavor profile, and we’re running with that.” It turns out that a lot of people in the bourbon industry do exactly what the Penny’s are doing – sourcing great and unused bourbon from large distillers and going from there.

But why The IX Bourbon? What sets them apart from their competitors?

Firstly, the main reason for the name IX (number nine in Roman numerals) is that they conceived the idea on the ninth year of their marriage, when their first daughter was born. She also happened to be born in 2020, the year the COVID-19 pandemic took hold.

“Everything was just chaotic – you can’t see people, you can’t visit your loved ones or if someone you knew was sick, you can’t physically go and visit with them in the hospital,” James says. “It was really a dark time. Part of the inception of this brand is that we wanted to do something that brings people together, and so when everybody starts to come together in 2021, they can come together around a unique spirit. Our mission at 2 Cents is, we want to create spirits that celebrate everybody, because while not all spirits are created equal, all people are. We wanted to have something that people could commiserate around, because everybody loves a good bourbon.”

As far as distinguishing themselves from competitors, James takes great pride in the fact that his wife is the CEO and president of the company.

“Not only is it black-owned, but it’s female-led,” he says.

The biggest factor that sets them apart from competitors, James says, is that they’re operating under the branding pitch of rising above being first.

“We feel like in the world today in 2021, we keep seeing all these articles about the first black student-body president at Harvard in 2021, or the first black female pro baseball coach in 2021,” he says. “We think it’s laughable in a society where everybody is supposed to be equal that people of color, the LGBTQ+ community or and women, are still celebrating firsts. Our monicker is to rise above being first. We need to really be a society that’s trenched in equality, to where people can move in these spaces equally and where everybody has the same amount of equity and opportunities. We’re coming out of the gate with a product that celebrates and talks about us coming together as a people.”

James says that in the bourbon industry, though everybody supposedly shares the sentiment of equality, it’s not always practiced.

“There’s not a lot of equity in the bourbon industry,” he says.

James explains that he has a background in project management, a profession that is 90% male.

“For years you have a man doing a job, and a woman gets the same job and she’s the first woman to ever be in this role,” he says. “We say in our mission that we want to celebrate everybody, because we’re all created equal. That’s what the branding of our bourbon is about, and also the branding of our company. We want to push the conversation and commiserate around something everybody loves about Kentucky, which is Kentucky bourbon.”

Look out for The IX Bourbon on social media, which can be an effective place to market products, especially during COVID-19 restrictions. Brittany stresses that they don’t yet have a full-time marketing team, and it’s just the two of them for now.

“We’re relying on our networks to get the word out,” she says.

When asked how people are responding to the drink itself, Brittany responds enthusiastically.

The couple was on a podcast recently with a group of bourbon connoisseurs based in Texas, and they raved over it. Despite tons of great bourbon flowing throughout Kentucky, James has preferred Old Forester 86 Proof for a long time.

“Because of some of the harshness of some bourbons, I sometimes mix with ginger ale,” he says.

The IX Bourbon, he proclaims, is one of those few bourbons for which “you don’t need a mixer.  You don’t even need ice. You can just drink it right out of the glass. It’s super smooth. It doesn’t have that harsh bite at the end. It just gives you the desired Kentucky hug so that you know it’s there.”

“I’m very upset that we have to sell it, because I would just keep it and drink it myself for the rest of my life – it’s that good,” he adds.

James is so passionate about bourbon in general that he believes it’s not a competition between one brand or another. He’s not in it to outsell another brand. Instead, his belief is that there’s enough good bourbon in the Bluegrass state for everybody.  He says, “We believe there’s enough room on the bar for all of us.”

The pandemic kept many people apart through last year, and when we were together, James says, there was much hurt. He and Brittany want The IX Bourbon to be a talking piece.

“We want everybody to take a break and relax,” he says. “Enjoy where you’re at in your space, because The IX Bourbon is about you not having to wait your turn to be recognized. Just be good to each other and enjoy the spirit.”