Greater Greenwood Community Band Festival
On August 9, eight bands from across the state of Indiana gathered to share their love of music. The inaugural event was a great success with excellent participation from musicians of all ages. The Greater Greenwood Community Band, established in 1993, brings together former band members who still love playing their instruments years after high school or college. The band meets in the Greenwood High School band room and has 80 members. The band is currently directed by Tom Dirks, assisted by Ora Pemberton. Today, the band is considered one of the most respected and entertaining community bands in the Central Indiana area.

The morning started with a pancake breakfast,and concluded with a mass band of 200 musicians playing “Stars and Stripes Forever,” conducted by Bill Kisinger from Purdue University.

For information on upcoming events, visit their website, greenwoodband.com, or email ggcband@gmail.com.

Hoosier Heroes Honored at Proctor Park
During the Vietnam War, over 58,000 soldiers sacrificed their lives for the love and duty they felt for their country. Of the 58,000, 1,532 were from right here in the Heartland of America. Unfortunately, the Vietnam veterans who returned safely were not given the “Heroes’ Welcome” that they deserved. 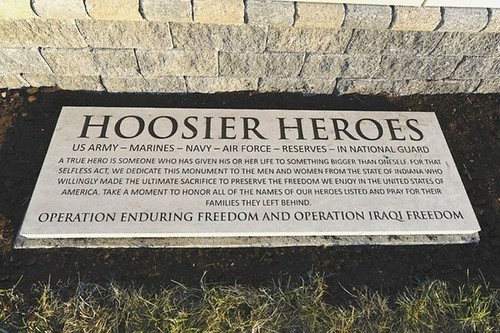 Feeling inspired to honor these veterans, the founder of Proctor Park, Maribeth Alspach, a recent recipient of the Spirit Award from the Johnson County Community Foundation, took it upon herself to raise the funds to build Proctor Park, townofnewwhiteland.com/proctorpark.htm, a space dedicated to honoring those individuals who served in our country’s armed services, law enforcement, fire protection and emergency services. Located in New Whiteland, “Proctor Park celebrates a community that came together as a family because of a fallen son and to honor a life given,” says Alspach.

On September 27, Proctor Park will dedicate its newest addition, a Vietnam Veterans’ Memorial. The structure will consist of five pillars and one main column. The five pillars will feature bricks bearing the names of the 1,532 Hoosiers who lost their lives during the war. This memorial will make it possible for family and friends in Indiana to see their loved one’s name represented as it should be, to honor the sacrifice that was made nearly 40 years ago.

A Lighthearted Look at the Art of ...