“Buckle up, we’re headed your way.” 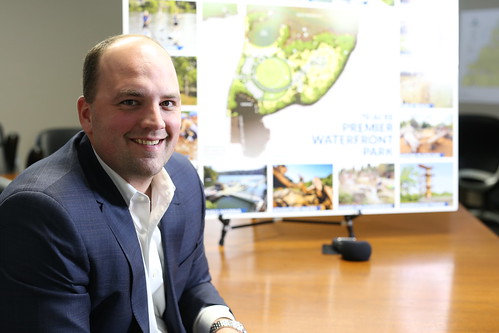 That’s the message Fishers Mayor Scott Fadness wants to send to residents of the Geist area. Fadness insists that “the long-term vibrancy of the Geist area is critical for the future of Fishers,” and he is doing more than simply talking about it.

The mayor is putting a plan in motion that will create more than a small ripple effect on the lake. Dynamic infrastructure projects and initiatives are coming to Geist in a way that residents of the community have yet to see for the district. The projects and initiatives center around 75 acres of land in the IMI quarry area just east of Olio Road on the south side of the Geist bridge.

Fadness and the City of Fishers are moving forward to purchase the land and turn it into a premier waterfront park in Geist.

“When we identified this location as the last parcel on the lake to do something of this magnitude, the city council and I had a conversation,” Fadness says. “We really aligned around this vision that we are going to double down and make sure that we put the right public infrastructure in place to transform the Geist area and preserve the little green space that is left around the lake.”

Ideas will be discussed throughout the summer as the project continues to gain steam, but the park could be developed to provide a public beach and cove area (perfect for swimming, kayaking and paddle boarding), bike trails, a fishing pier, sand volleyball courts, a nature playscape, observation tower and even an amphitheater. The park could also be used as a start or finish line for races and events such as the Geist Half Marathon. The possibilities for the 70-plus acres are endless. Fadness believes Geist has the opportunity to be the “Boulder, Colorado” of Fishers — a place to bike, fish, hike and enjoy the water all within a beautiful residential setting.

“This project is really transformative for the lake. It not only creates new green space but it reduces the pressure on the lake by preventing more intense residential development that would inevitably include more boat traffic,” Fadness says. “We want Geist to have an interesting and dynamic identity. We believe that the Geist area serves a very unique role in our community where Mother Nature meets recreation. Now, in order to accomplish that, we have some work to do. This plan is a great first step toward achieving that identity.

“This park provides us an opportunity to really create this center in the southeastern part of our community that not only serves as green space for parks but rather a catalyst for revitalization of this particular area,” Fadness adds. “So, it is so much more than just a park. It really is a catalyst for redevelopment in Geist.”

Perhaps the most unique aspect of the City’s plan is that the waterfront park would be open to the public. Fishers and Geist residents would be able to access the park and enjoy it with their families.

That concept is something Fadness says has been missing when looking at Geist and Fishers as a whole.

“For a long time we have had this conversation about Geist not being accessible to the public in a really meaningful way,” Fadness says. “Sure, there’s a boat ramp, but if I’m a resident of Fishers and I want to take pride in the fact that I have this natural asset, there’s really nowhere that anyone can have that experience with their family.

“Now, imagine the rest of our residents who can come out and actually enjoy the lake, and I don’t mean speed boats, I mean kayaking, canoeing, a beach, enjoying the natural environment. There aren’t many communities in the metropolitan area that have a Smithsonian affiliated museum on one end of their community and this amazing, natural area and reservoir on the other. That is a really cool combination.”

So, what does the process for the park look like? Aerial photo of the 70 acres currently occupied by IMI. Fishers plans on turning this into the city’s largest park with a possible outdoor amphitheater, walking trails, lookout tower, and non-motorized watercraft launch.

Right now, the City of Fishers is focused on acquiring the land. There are multiple owners of the 75-acre land, and Fadness has made contact with them about purchasing the land to build a public facility. The City is moving forward to see if they can come to an agreement in price. Fadness says if they cannot, “there is clear precedent for the City to move forward under state law, condemn the property and pay the owners a fair market value for the land.”

Fishers will move forward with this process to acquire the property throughout the summer and early fall with the expectation of bringing it to a conclusion and beginning the process of designing the waterfront park.

“(Once the land is purchased), we will get input from our initial committee and then roll out a broader plan to the community to seek input and feedback with anything else Fishers and Geist residents might think about,” Fadness says. “We will take all of that into consideration and then work with a design team to come up with a truly transformative park.”

The initial idea for the park came about when Fadness facilitated discussions with Geist residents who voiced concern about the future of the area. That group became the initial committee on the projects.

While the City has recently implemented projects in Geist like adding trails, lights to the bridge and branding roundabouts, no project has reached the magnitude and impact quite like the forthcoming waterfront park can. For comparison, the waterfront park, which the City will later decide the official name of, would be twice the size of Roy G. Holland Memorial Park in Fishers.

The most common complaint that Fadness hears about Geist Reservoir is that the lake is too busy. Because of the location on the other side of the Olio bridge, he says there won’t be that “intense boat traffic”, which will allow families to swim or paddle board and relax or explore all the park will have to offer.

At the end of the day, Fadness wants Geist residents to know that the City is listening and excited to bring public infrastructure that will make both communities proud.

“It is such a unique identity out there,” Fadness says. “If you go hang out at Mama Bear’s or go spend time in the Geist area as I have, it has its own flavor and it is unique to the metropolitan area, not just Fishers. What is important for Geist residents to know is that the City of Fishers is committed to seeing Geist reach new heights and reach its potential. That means being aggressive on investment, branding, community outreach and coordination. (This park) allows Geist to take pride in their district and Fishers to take pride in the fact that Geist exists as a district in this city. Integrating the two, I believe, generates more pride for both.”

Can't wait for this park to be finished!

[…] 70-Acre Waterfront Park Coming to Geist Perhaps the biggest news for Geist in 2017, Fishers Mayor Scott Fadness announced plans for a 70-acre waterfront park coming to the area. It will be the largest city park yet. The projects and initiatives center around 75 acres of land in the IMI quarry area just east of Olio Road on the south side of the Geist bridge. More, exciting updates are sure to come in 2018. […]