Is it possible to be a victim and not even know it? Yes it is…especially if you are relatively new at this “life” thing (i.e., teenager). Many teenagers just don’t have enough life experiences or confidence to realize that a bad gut feeling they have might really be something important that needs to be addressed. It is for this reason that the Red Flags Campaign was started, over a year ago, through Advocates for Children and Families (AFCF) in The Cherish Center in Noblesville. This campaign began as a way to meet the kids where they are, in social media, to identify the red flags of victimization.

Amanda Calvin was the innovator for this idea, under Wendy Rayburn, the Executive Director. “I knew they were looking for an education part [of victimization]. The light bulb [for the idea] was ‘warning signs.’ That translated to creative posters that would identify the red flag. All the posters are black and white with the red flag.” A unique warning sign is individually addressed in each poster. “Visually, we wanted to show the raw emotion of how one feels when these warning signs or red flags find their way into a relationship,” says Calvin. “The intent is to get their attention with the visual and then educate through additional resources and on-to-one mentoring.” Calvin adds that this initial series focuses on how the unhealthy behaviors make you feel. Another series will illustrate the positive things you can do to self-protect. 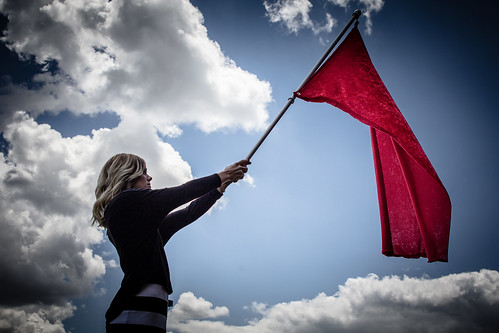 Wendy Rayburn explains: “The best prevention tactics are not scare tactics. We, as people, tend to gravitate toward the fun and happy stuff. Okay, well, in prevention, that is the best way to promote any educational piece. What’s the ‘good’ side of it? What does the ‘good’ look like?” stated Wendy. “You’re talking about encouraging ‘good.‘ That’s what mentoring supports.” Teaching the kids what is good and reinforcing the good will make those things that are actually “bad” more obvious to them.

The genius piece of this equation is that they have created a leadership group called the Advisory Board and Mentoring Program, consisting of 10-12 kids, ages 14-18 years old. Who else would know the issues and relevant media better than kids the same age as the target group? These kids work closely with Amanda and Wendy to send a relevant message at the appropriate time. The campaign is able to make an impact because it focuses on social media as a platform to communicate.

Since technology and teen issues are constantly evolving, this leadership group is intended to keep the campaign ever-changing and current. These individuals are also advocates for this campaign in their own schools and with their peers, spreading the message through word of mouth and just by being knowledgable to recognize and speak out if they see these red flags. 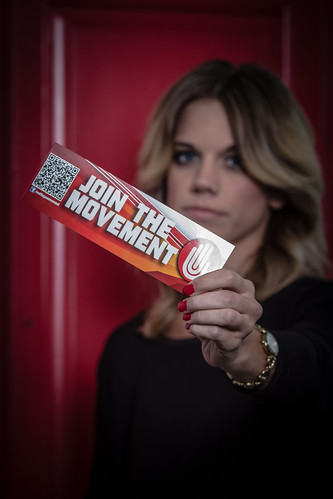 “They create the campaign, keeping it from being five years behind the times,” says Rayburn. “Kids wearing T-shirts saying ‘this is where you get information’ is more effective than adults lecturing to them. Kids listen more to other kids than to adults,” says Rayburn.

Relationship issues manifest in many ways, in addition to sexual or physical abuse. They can include: excessive texting and phone calls, name-calling and threats, isolation, jealousy and possessiveness. They are demeaning, threatening or intimidating. “Teens need to learn to trust their gut in all things in all ways,” says Rayburn, ”and we need to help them not be afraid to ask for help.”

What makes the campaign so invaluable is that it is empowering teens and their parents. All parties need to know the signs of victimization so they can steer the person toward getting the proper help, ultimately eliminating it from happening again.

Research shows victimization starts young. It could be as simple as: “Somebody took my backpack.” How it is dealt with can set a tone for how intimidation triggers later in life. Letting things slide or ignoring early signs can encourage that cycle to continue into more complex issues with age and situations. 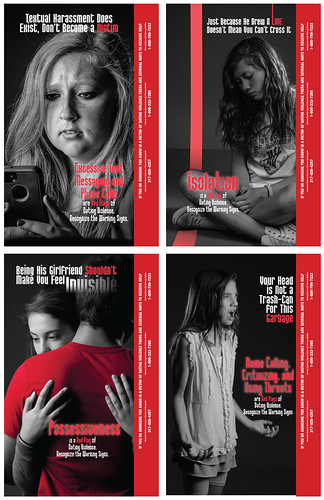 Red Flags posters have been created for use in schools. Each poster identifies a safe place to report or seek help for victims, most often the guidance counselors. The campaign images placed on social media direct victims to hotline numbers or links to resources. There is also a presence on Instagram, led by the Advisory Board and Mentoring Program. Within the first year of the campaign, posters and flyers have been distributed to libraries and schools within Hancock and Madison Counties. AFCF will continue to grow the campaign within additional libraries and schools in Hamilton County.

“We want to educate the kids without being in-your-face or implementing a stuffy curriculum,” says Rayburn. “We have a naturally fitting partnership with Prevail, a victim advocacy group, with a prevention curriculum that we weave in, but Red Flags is the social connector. It’s a fast, relevant and non-invasive approach to sharing information. This is what makes Red Flags a campaign,” says Rayburn.

How can you get involved? Advocate for the Red Flags Campaign to be in your child’s school or community. Everyone can be a voice in preventing unhealthy relationships. For more information about getting involved, please call the AFCF office at 317-773-3275 or you can go to afcfindiana.org or check out Red Flags on Facebook.

When asked, near the end of the interview, what is the important message that they want to express, Rayburn and Calvin replied: “To reach kids, where they are, to help empower them to know what kinds of things are harmful in relationships and what is healthy. We want kids to advocate for each other, looking for red flags of victimization.”

Pedal & Park at the Indiana State ...