Kate Drury practiced law for 10 years, all the while dabbling in business ownership on the side. She owned a boutique for a bit before selling it and opening the Flying Cupcake in 2007 (now in six Indy locations) and the Dancing Donut in 2015 in Fishers. In October, she debuted her most recent venture — the Lemon Bar, located in downtown Zionsville.

“I like to evolve and try new things,” says Drury, who describes her new business as a hybrid restaurant and bakery that offers lunch, dinner, dessert and drink menus. “We have beer, wine and cocktails, along with sandwiches, soups and big-bowl salads.”

They start serving lunch at 10:30 a.m. and switch to the dinner menu at 5 p.m., which consists of heartier items such as meatloaf and mashed potatoes.

“We are very comfort-food oriented,” says Drury, noting that customers have been going crazy for the soups, which are made in-house, 100 percent from scratch. “People have been ordering seconds because they’re so tasty.”

The fried green tomato BLT made with Bloomington’s Scholars Inn bread is very popular as is the roasted butternut squash. Everything is fresh. They even toast the pumpkin seeds that top it. The Hoosier Cheese Board (made up of Indiana cheeses) and the Hoosier Poutine (thick fries smothered in Sage Sausage gravy and topped with cheddar cheese) are also slam-dunks.

They offer a great selection of local beers. Plus, the bartender incorporates local options into drink combinations such as Mogul Gin and Vodka.

In most restaurants, customers come in for a meal and the dessert is an afterthought. Not so at the Lemon Bar, where desserts are their specialty.

“People often split a giant slice of cake because they know our dessert quality,” Drury says. “They don’t always know about all the other stuff we offer, though, so they try a meal or a drink and are pleasantly surprised.” 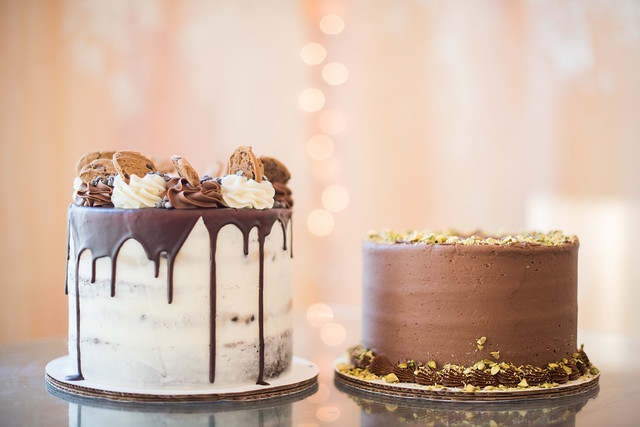 Customer response thus far has been phenomenal. Not only is there a daily wait for lunch, but folks are also praising Drury for bringing something unique to Zionsville. Perhaps the biggest indicator of success is the number of repeat customers Drury has already seen.

“That’s the difference of if you’re going to make it or not — if people come back time and again,” says Drury, who chose this charming location because she wanted a building rich with history. Originally erected in the 1950s as a car wash (there are three distinct bays), Drury was drawn to the architecture. But it required substantial renovations.

“The place didn’t have correct plumbing,” she says. “The floors were way out of whack, level-wise, with an eight-inch difference between one side of the building and the other. It would’ve been far simpler to level it and rebuild, but I wanted to preserve the building’s heritage.”

She kept all original trusses and as much brick as possible. She then had a blast decorating the interior, incorporating tons of twinkle lights on the ceiling and rafters. She also ordered several 1930s green floral lampshades from a vendor in Paris, making sure to provide a nice balance between the feminine and the industrial. For example, she’s got black framed glass garage doors juxtaposed with lemon wallpaper. She also hung a crystal chandelier with blue droplets above stark concrete floors.

The unique countertop, which surrounds the hostess stand and several other walls is fashioned out of something that looks like shingles on a dollhouse.

“It’s a subtle detail, but it makes the room,” Drury says. “The same is true of the handmade paint effects. It’s made to look like an old garage with layers of paint but it’s actually new, safe and fresh.”

Though the building sits on the original footprint, Drury added a private party room with tall ceilings, a giant chandelier and a faux fireplace that can accommodate up to 18 guests.

Drury and her husband, Cameron, have three teenagers, which means busy schedules and lots of time juggling. Still, she wouldn’t change it for the world.

“My husband is extremely understanding and supportive,” Drury says. “We love this place. In fact, we joked before we opened that if all else failed and nobody came, we would just hang curtains and move in.”

It’s safe to say they won’t be setting up cots anytime soon. The Lemon Bar, open Tuesday through Sunday, is a hit in Zionsville.