Over time, advancements in medical technology, not to mention the enlightenment of the general population, has meant that those who are born with Down Syndrome can live beautiful and enriching lives. Just ask Hendricks County resident, Cheryl Carlton and her little brother Ricky Hull. According to Carlton, when Hull was born 59 years ago, her parents were pressured to institutionalize their son because he was born with Down Syndrome.

“We already had this large family as Ricky was number seven out of nine, so we had a built-in support system,” Carlton says. “Dad said, ‘No, we’re taking him home and putting him in with the rest of them!’ I honestly don’t ever remember a time when we were told Ricky was different or that there would be things Ricky couldn’t do. As kids, he was just one of us.”

As the children grew, his siblings took him under their wing and taught him different things. Carlton recalls coming home from school and getting out her books to tutor her little brother in reading.

“Back in those days, children with Down Syndrome typically weren’t taught to read or write. If they were even lucky enough to be enrolled in a school, they had to be at a level that teachers felt like they were trainable,” Carlton says. “We weren’t told that he can’t learn to read or write so before long, he was reading and writing.”

Hull’s mom never wanted Ricky living anywhere but at home with her. She had no interest in putting him in a group home. So, he lived with her until she passed away 11 years ago, at which time his brothers and sisters discussed where he should reside. Three brothers live locally (Raymond in Danville, Jesse in Martinsville, and Alan in Cicero) while Roberta is in Arizona and Jerome is in Las Vegas. (Siblings Ronnie and Joe have passed away.)

“At first we thought perhaps he could divide his time living with me and my husband, Kenny, and my brother, who lives in Danville, but we wondered if that would be too disruptive to his routine,” Carlton says. “So, instead we just asked Ricky where he would like to live and he said with me and Kenny.”

So, he moved into Carlton’s home and occasionally spends weekends with another sibling. The local brothers and sisters also gather once a month for a breakfast at Cracker Barrel where all the waitresses know Hull’s drink order by heart: decaf coffee.

Hull works five days a week at Sycamore Services, which trains and employs those with disabilities to improve practicing skills of independence. Hull adores his coworkers.

“He hates to miss a day,” Carlton says. “Even to get him to go on vacation is hard because he doesn’t like to miss a single day of work.”

Hull has also joined a walking club at Sycamore Services that provides exercise and socialization. Usually, the group treks through neighborhoods or around Avon Town Park. On Monday evenings, Hull gets together with friends from Sycamore Services to grab a meal and go bowling or engage in some other fun social activity. Five years ago, Hull and his family began participating in the annual Buddy Walk, which takes place each October and raises awareness and funds for Down Syndrome. Established in 1995 by the National Down Syndrome Society, the walk brings together communities to advocate for those with Down Syndrome. Each year, Hull’s number of supporters has grown, as has the dollar amount he has raised.

“We started with 10 family members that first year, and this year we had 70 people walk with us,” Carlton says. This included brothers, sisters, nieces, nephews, friends and a bunch of supportive community members.

Hull has always set a goal to raise 10 times whatever his current age is so when he was 55, he hoped to raise $550.

“Usually we end up raising that money with mostly just our family contributing, but this year Ricky got support from the Hendricks County Fraternal Order of Police, along with other donations from Avon, Danville and surrounding areas,” Carlton says.

All this support took Hull well past his mark. He raised more than $8,200. Buddy Walk coordinators even erected a billboard with Hull’s smiling face as a thank-you for his commitment to all he does for the Buddy Walk.

“In his life, Ricky has done 10 times more than what anyone would have expected of him,” Carlton adds. “We always felt like we were helping and teaching Ricky, but looking back at it now, he taught us more.” 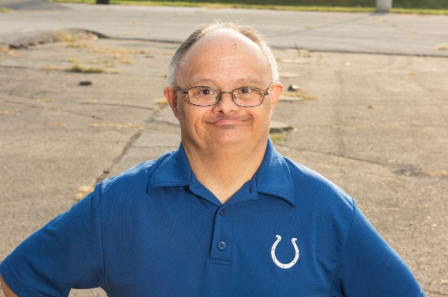 Perhaps the most important lesson learned is to take time to stop and smell the roses. He also recognizes that hugs heal the soul.

“He’s always sharing a hug and a smile,” says Carlton, who notes that he seems to have a sixth sense about knowing when somebody needs a listening ear. One time, a few years back, the family was attending Old Fashioned Days, strolling by the booths making small-talk with vendors. Out of nowhere, Ricky told a woman that he had a girlfriend but that she passed away. Tears immediately sprang to the woman’s eyes and she shared that her husband had died recently.

“She just started opening up and sharing all of this personal stuff with us because Ricky let her feel safe enough to let her guard down and share her grief,” says Carlton, who suspects that her brother’s intuition goes back to his ability to be in tune with his surroundings, focusing on one thing at a time rather than getting distracted by a hundred things at once.

“He shows us that it’s good to slow down and take life easy. Nothing’s ever too serious,” Carlton says. It’s a lesson we can all learn if we want to relish life.

“We go through the stores and often people are off in their own little world, hurried and frustrated as they try to get up and down the aisle,” Carlton says. “Ricky is usually smiling, though, and when they see him, they smile back. It’s as if his smile resets their mood.”

Though his mom used to worry about what life would be like for Ricky when she was gone, Carlton says she would be pleased to see what’s become of him now.

“If she could see now all of the tremendous support from this community —the attention and hugs and love he’s getting, she would be thrilled,” Carlton says. “She would also be proud to see that he’s one of the largest Buddy Walk donators. I wish she could be here, but I feel like she’s looking down and seeing it all.”