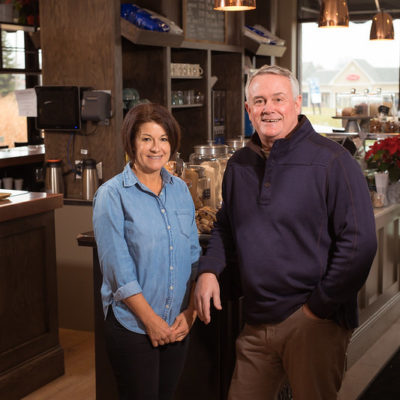 Be the first one to rate! Submit Review
Post Views: 906 When owner Debbi Bourgerie opened Rosie’s Place in 2010, it was a celebration of a dream come true. The restaurant has come a long way since opening its first location in Noblesville. Nearly a decade later, Rosie’s Place is often heralded as some of the best breakfast and baked goods around Central Indiana.

Bourgerie never could have imagined the success that was coming for her restaurant and bakery, much less the notion of owning multiple locations one day. But that is exactly what happened.

She opened her second location in Zionsville in 2014, which has also experienced great success. Still, over the last few years, Debbi’s friends and family have asked, “What about Carmel?”

The Bourgeries lived in Carmel for about 12 years, and their kids graduated from Carmel Clay Schools. The city has always held a special place in Debbi’s heart.

“We actually considered Carmel for our very first location,” Bourgerie says. “The timing just wasn’t right back then.”

This year, Bourgerie found the perfect spot in The Olivia along Main Street. In October, Rosie’s Place Carmel officially opened right around the corner from Bar Louie and Verde.

“Being in The Olivia, with all the new building that has gone on there, has been great,” Bourgerie says. “We’re finding that there are people here who have never been introduced to Rosie’s. It has been fun to get to know the immediate community.”

As for family and friends of the restaurant, they got their wish.

“It’s funny because now people tell us that Carmel has their own Rosie’s,” Bourgerie says. “They don’t have to drive to Zionsville or Noblesville. The community has really taken ownership of it and claim it as theirs. The response has been phenomenal. The support has been great, and there are so many people who are thrilled to have one close to them. After having lived here so long, it is special. We have so many friends here.”

Fans of Rosie’s Place will find the same great food and baked goods as the other locations. But, as far as the building goes, the Carmel location does stand out.

Both the Noblesville and Zionsville locations are in buildings that are more than 100 years old. The Carmel location, however, is in a brand new building, which gave Bourgerie a blank canvas of sorts to work with. “Being in a brand new building was definitely a challenge,” she says. “We wanted it to have that Rosie’s feel to it but still be its own place. One of the things that make this location so unique is, because it has such high ceilings, we actually have a mezzanine level with upstairs dining. We definitely still broke the space up to make it feel nice and cozy, like our other locations.”

The Zionsville location, Bourgerie says, is still the biggest one. But when warmer weather comes and the outside seating is available, the Carmel location takes the cake on the total number of seats available for guests.”

Regulars and first-time guests have plenty of menu options. On the breakfast side, Rosie’s Place is well-known for its Eggs Benedict, including the Classic Eggs Benny, Farm Style Eggs Benedict and the Pork Tenderloin Benny, the latter of which is a split biscuit topped with hand-breaded tenderloins, two poached eggs, cheddar cheese and sausage gravy. Speaking of gravy, don’t forget to grab an order of the always popular Biscuits & Gravy with Rosie’s homemade buttermilk biscuits.

Those dining for lunch can enjoy fresh salads and soups as well as Rosie’s popular sandwiches like the Southwest Chicken Sandwich with grilled chicken, bacon, pepper jack, avocado, lettuce, tomato and chipotle mayo, among many more options. Bourgerie incorporates many of her father’s own recipes.

“We aren’t just a quick breakfast, brunch place,” Bourgerie says. “We really try to focus on our service and make it an experience for people. We make everything from scratch — from breakfast through our lunch menu. The Bennys are quite popular, and we do a lot of specials with them for breakfast. Our French Toast is another popular pick as well because we make our own bread. On the lunch side, our Corned Beef Reuben is really good, too. The Reuben has probably the best rye bread I’ve ever had.”

And, of course, you can’t walk into Rosie’s Place without noticing the bakery, which is the first thing you see as you go through the doors of the Carmel location. The bakery is jam-packed with everything from huge cinnamon rolls to cakes, pies, bread, muffins and cookies. But one baked item always has patrons drooling.

“Our signature item for the bakery is the Gooey Butter Cookies,” Bourgerie says. “I grew up in St. Louis, which is largely German. When I was growing up, every little pocket of communities had their own bakery, and every bakery had their version of this Gooey Butter Cake. It actually happened by mistake by a baker in St. Louis and just became famous. It is like a coffee cake.

“When I opened Rosie’s I wanted something from my St. Louis background. I was making the cake, but people wanted something smaller they could take back to their office. So, I made them into Gooey Butter Cookies. We run out of them every day in all three of our locations.”

From the beginning, Rosie’s Place has been family-owned. Debbi runs the restaurant with her husband Michael, and she says that family ownership and atmosphere will likely always remain.

She takes pride in being family-owned for nearly a decade now.

“When I opened Rosie’s in 2010, there were so few independent, family-owned restaurants,” Bourgerie adds. “We’ve always supported local, and I’m thankful that these communities have supported us over the years.”

As for what’s next, Bourgerie isn’t looking that far ahead. As you’d imagine, the owner is focused on managing her three, already busy, locations. Still, as she was asked for several years about a possible Carmel location, other friends have asked if Fishers or possibly more locations are on the horizon.

“Opening this many locations was certainly never the intention,” Bourgerie says. “It has all just happened organically. We have no plans currently to open another one. But, we also had no plans to open Zionsville or Carmel locations. So, you can never say never.”