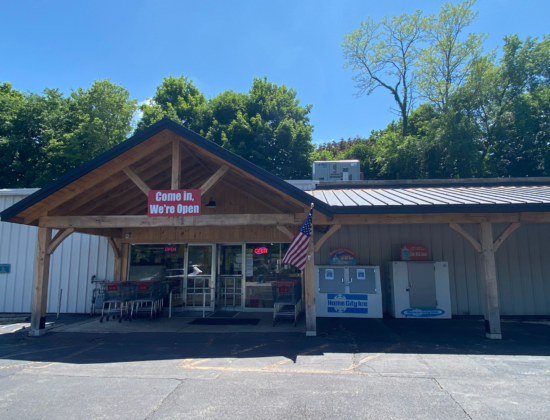 Be the first one to rate! Submit Review
Post Views: 126

Customers Can Find Variety and Value at Renewed Marketplace Renewed Marketplace has door prizes for customers in the community, free coffee and cookies, and low prices. They have also featured delicious burgers, cinnamon rolls, free doughnuts and homemade ice cream at the store, to the delight of their loyal customers.

Troyer co-owns Renewed Marketplace with Kevin and Mina Troyer, and James Troyer. Troyer says good prices and a wide variety of merchandise have already made the store popular in the Bristol area.

“We have a full line of groceries, and we also have Walmart and Target overstock and returns that we sell,” Troyer says. “It’s great merchandise.”

The groceries at Renewed Marketplace include fresh produce, milk, eggs, frozen foods, baking supplies and numerous other food products to choose from.

“Throughout the year we have in-season fruit that is freshly picked, and we have meat that was raised and processed locally,” Troyer says. “We have frozen, fresh, healthy food, and junk food here.”

The overstock items have also been popular with customers.

“Our overstock section has a variety of furniture, clothes, shoes, tools, lawnmowers, lawn spreaders, bikes, toys, kitchen appliances, decor, bedding, and much, much more,” Troyer says. “People love the wide variety of merchandise we have to choose from at low prices. They can find a lot of things for the whole family.”

Many of the small appliances are priced at 50% off retail prices, which pleases families trying to save as much money as possible. “Our inventory also changes daily, which a lot of people like,” Troyer says. “We are always restocking shelves.”

Carports have also been popular. Troyer says drivers can protect their cars, motorcycles and other valuables with a carport. The portable garages come with roll-up doors, as well as separate, side-entry doors.

Troyer says pools are also available in all sizes, from kiddie pools to bigger, above-ground sizes. Goggles and pool toys are also sold.

“We also have new bedding that comes in, as well as bed frames in our inventory,” Troyer says. “We also get beds, futons and desks that a lot of our customers really like.”

Troyer notes that many customers have commented positively on how clean and organized the store is, as well as the friendly staff.

Renewed Marketplace is located at 809 East Vistula Street in Bristol. For more info, call 574-370-4177 or go to facebook.com/renewedmarketplace.