On the weekend of October 11, the USA Power Soccer team held its Team USA Selection Camp at the Community Life Center. Twenty athletes from across the United States were rigorously tested. Even though all gave a valiant effort, only 12 made it on to the team to compete in the World Cup. 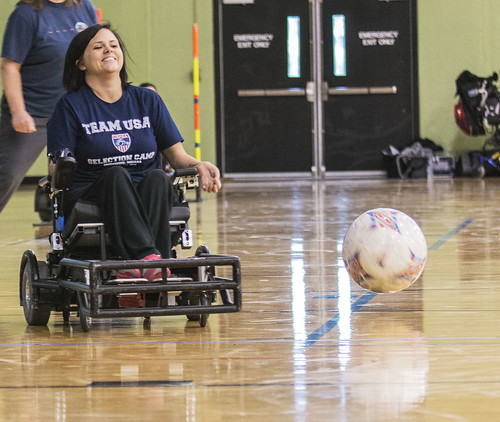 Power Soccer is something that most people are not familiar with. It is the first competitive team sport designed and developed specifically for people of all ages and genders who use a power wheelchair. Participants include people with quadriplegia, multiple sclerosis, muscular dystrophy, cerebral palsy, head trauma, stroke, spinal cord injury and other physical challenges. Power Soccer is the fastest growing sport for power wheelchair users. It combines the skill of the person with the speed and power of the chair to create a fun, competitive and accessible opportunity to play the most popular sport in the world. Power Soccer was originally developed in France in the early 1970s and was introduced to the United States in the early 1980s.

Since then, many countries have created their own version of the sport, which led to an international meeting in 2005. The six countries that attended created an international organization and unified the rules for global competition.

In 2006, the United States Power Soccer Association was formed. Team USA won their first World Cup in 2007 in Tokyo and again in 2011 in Paris. The site of the 2015 World Cup Tournament has yet to be determined, but it will be the largest gathering of Power Soccer athletes ever with teams representing 15 countries. Out of all the places nationally, Team USA is based right here in Central Indiana, coached by Johnson County resident Mike Hayes.

Hayes has always had a love for sports.

“I’ve always been a sports guy, both playing and watching,” said Hayes. “I started helping with Power Soccer during practice in 2006. I love the strategy in this game and coming up with plays.” 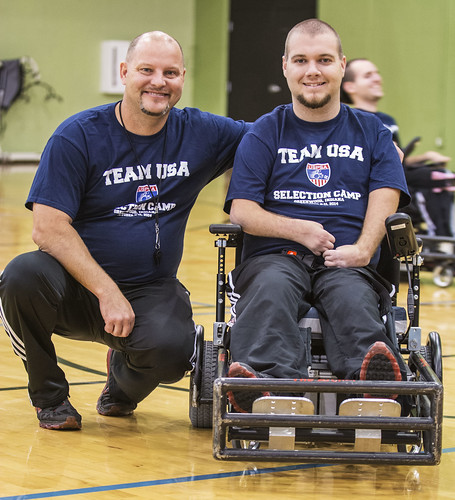 Hayes locally coaches the five-time national championship winning team, the Circle City Rollers. Nationally Hayes has helped with the Team USA at training camps, the World Cups in 2007 and 2011 and now is the head coach for the 2015 team. Hayes also has another reason for his passion for the sport – Michael Archer, his stepson. Archer is involved in Power Soccer, which makes the journey a little bit sweeter.

Archer was chosen to be a member of the USA National Power Soccer Team that will compete for the 2015 World Cup. He played for the team during their 2007 and 2011 victories that also included him bringing home the Gold Medal and MVP Award. He is very excited about where the team has been and where it is going.

“Team USA has dominated in the past two World Cups in Japan and France, bringing the Gold Medal home in both tournaments, and we have the ambitious goal to make it three in a row.”

Archer’s Power Soccer adventure started in 2004.
“I started when I was at a softball game for my sister. Some lady stopped me and asked me if I have ever heard of Power Soccer and invited me to their team’s practice,” said Archer. “From there I fell in love and have been participating in the sport for 10 years.”

Archer is a 24-year-old college graduate from Purdue University with a bachelor’s degree in aeronautical technology. He was born with Arthrogryposis and has been using a wheelchair since the age of 12. Arthrogryposis is a congenital joint contracture in two or more areas of the body. Children born with one or more joint contractures have abnormal fibrosis of the muscle tissue causing muscle shortening. Therefore they are unable to do passive extension and flexion in the affected joint or joints mainly involves the hands and feet.

Although Archer has daily challenges, he never gives up.

“I have seen this sport give individuals with disabilities hope; hope that they can compete in a highly competitive sport by themselves,” said Archer. “To be a part of the national Power Soccer team is the biggest honor I’ve ever received. To know that I will be representing my country, along with my fellow teammates, is very exciting. Many opportunities throughout life arise, but then there are things never even conceived that become a reality. I promise I will be the best that I can be. This sport gives me the freedom to compete at a high level completely independently.”

Both Hayes and Archer have similar goals for the team: to win!

“I want to see us become one as a unit by trusting each other,” Archer says.

Hayes also adds that he wants to build the best team to represent the USA both on and off the court. A focal point for Hayes is to teach athletes that they can overcome anything in life.

“If our players can live a better life in the future, then I have done my job as a coach,” said Hayes.

Archer also adds that this sport gives people with disabilities the chance to excel in other areas of their life: “People in power wheelchairs are very limited in what they can do, but this sport gives them the opportunity to be an athlete. And trust me they are ATHLETES. They are always going to have challenges in life, and this sport makes them use their minds, ability and skills to achieve those goals.”

How Can You Get Involved