Kent Maxfield’s Trip of a Lifetime 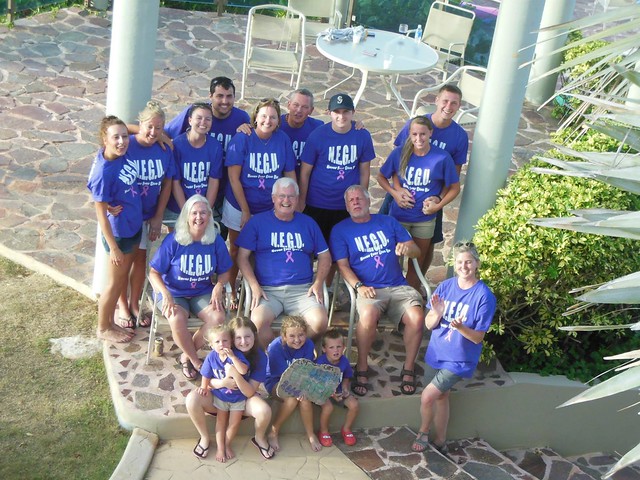 Two years ago, upon receiving the news that he was diagnosed with pancreatic cancer, which had also spread to his liver, Kent Maxfield was told he had 11 months (on average, based on similar cases) to live. He disagreed with that expiration date. “At that moment I had three choices: I could lay down and die, sit around feeling sorry for myself, or get busy livin’. I got busy,” said Maxfield.

Shortly after the diagnosis, Maxfield had a procedure called a “whipple,” which makes him a Whipple Warrior. This elite fraternity of men and women who have pancreatic cancer post photos of themselves celebrating milestones in their lives. “The secret to longevity is to keep goals,” said Maxfield. The motto for the Whipple Warriors is “Never Ever Give Up.”

Maxfield celebrated his one year post-surgical anniversary in Vegas, replete with a photo alongside two showgirls. Marking his second year anniversary, he happened to be on a plane, so he had a photo taken flanked by two flight attendants. He was going back to Vietnam after 47 years.

One of the items on Maxfield’s bucket list was to return to Vietnam where he served in the Army’s 1st Infantry Division. With the support of his three daughters, Laura Groom, Lisa Maxfield, and Cheri Weisheit, and a couple close friends, veteran Mel Lester and Dave Burtner, Maxfield made the trip. His mission was to provide scholarships and aid to four orphanages that care for children, with one that specializes with helping autistic children. The financial and material donations provide for teacher training, children’s medical care and scholarships for children with special needs.

Maxfield felt an obligation that was left to be fulfilled in Vietnam. “I felt like we abandoned the Vietnamese, and I wanted to have some closure there,” said Maxfield. “If I didn’t go back as a tourist, I wanted to go back to do something to help them.”

“The Bridge” bible study group at Geist Christian Church strongly supported the trip. Maxfield, Lester and Burtner are members of the Bridge. Another member and close friend of Maxfield’s, attorney Steven Hardin, has a son with Asperger’s.

“When we learned that Kent would be meeting children with autism and raising money to train their teachers, we [the Bridge] asked what we could do to help,” said Hardin. “Our son, Michael, was diagnosed with Asperger’s Syndrome when he was 2. Michael is a talented artist, and he created 28 drawings for Kent to take with him for the children. On the back of each drawing was a photo of Michael at his drawing table along with words of greetings and encouragement from Michael to the children of Vietnam. When Kent presented the drawings, he said that the students and teachers were so thrilled that the teachers said that they were going to permanently display some of the drawings to inspire the children to pursue their dreams ‘just as Michael from Fishers, U.S.A., had done!’  When Michael heard that story and saw the photos of Kent presenting his drawings to the children halfway around the world, he felt so inspired that he could help make a difference in their lives.”

“If you go with love, you receive love” is a mantra for Maxfield. The trip to Vietnam was truly a healing experience for him. After 47 years, his burden of guilt was alleviated, and he came home with far more joy than he thought he would.

“Kent’s journey is but one example of how he lives his life every day to serve other people. He has made a difference in my life and in the lives of my family,” said Hardin.

During the entire length of the trip, the Vietamese were celebrating Tet. For Maxfield, he had disturbing memories of the Tet Offensive, not realizing what a wonderful celebration Tet is for the people of Vietnam. “It’s like their New Year, and lasts 15 days,” said Maxfield. “I no longer have a negative association with it.”

Maxfield’s next trip is on an Honor Flight. On April 4, the Indy Honor Flight is sending two planes of heroes to see their monuments. “I hope to bring awareness to the brothers that I lost over there,” said Maxfield.

Being 14 months past his projected expiration date, Maxfield credits the power of prayer. He is on the prayer list of 15 churches. His faith, family and friends feed his already amazing strength of character.

“There are benefits to being terminal,” said Maxfield. “I order whatever I want from a menu without looking at the prices. And if you think about it, we are all terminal; it’s just some of us know how it will happen. It’s a no-brainer, having accepted death while fighting in Vietnam, I can’t be afraid now. I just live each day.”

It’s Time to BRAG About the Binford ...