What most people know as the RE/MAX building off of Fall Creek is not just RE/MAX Realty. The building hosts office suites for a variety of people, including the atGeist.com team.

The offices used to be home to a medical center, but two and half years ago, Chris Schulhof bought the building and turned it into office suites after seeing a strong need for the idea.

The demand was so strong that the office suites have been full since the opening of the building, and after having to turn so many people away, Schulhof decided to expand the building. He worked with Fishers Town Manager and Mayor Elect Scott Fadness to come up with a plan that would meet the demand and the town’s ordinances. 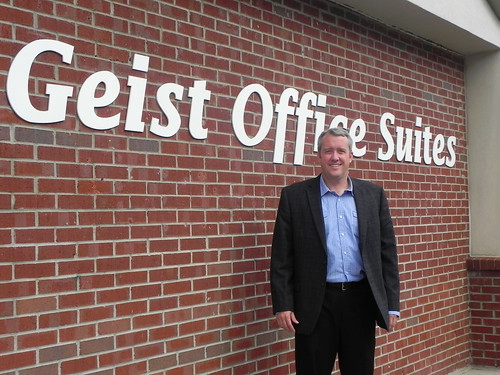 While making the plans for the addition, Schulhof wanted to make sure that the building would look as if it was all built at once, while keeping the building as eco-friendly as possible. He also made sure that his suites were different than traditional office suites by including LED lighting throughout the building a flat screen TV in each suite. Tenants also have 24-hour access to the building, and conference rooms are available for use.

Convenience is one of the best features for tenants since many live in the Fishers/Geist area.

As of now, there are three suites open for future tenants, and Schulhof thinks that they will be leased quickly. For more information, visit GeistOfficeSuites.com or call 317-585-7653.