“The Stuka was the premiere dive-bomber of the Luftwaffe…and became one of the symbols of the Blitzkrieg.”
– The Warbirds Resource Group

It began on the roof of the porch at the side of our house at 6129 Winthrop. That’s the perch where I sat to scan the skies for enemy airplanes during World War II. I was a Cub Scout – and later Boy Scout – patriot during the war, collecting scrap paper, scrap metal and tinfoil, raising a Victory Garden in the backyard, buying War Stamps (later called Defense Stamps) in my dime stamp book, buying the 78 RPM records I played on the wind-up Victrola in the basement like “We’ll Heil, Heil, Right in Der Führer’s Face” and “Goodbye Mama, I’m Off to Yokahama” as my friends and I marched to their tunes and memorized the words.

Besides all that, the most exciting and seemingly “grown-up” activity I engaged in was looking through my binoculars to see if I could spot the outline of a German Stuka, Messerschmidt or Japanese Zero whose outlines I had faithfully memorized from a manual for air raid wardens.

Why did I think the Germans and Japanese would fly right over such coastal cities as New York and Boston or San Francisco and Los Angeles to knock out Indianapolis? It was clear as the nose on your face: if the dastardly enemies could knock out Indianapolis, the heart of the heart of the country, they would destroy the morale of America in one deadly blow and win the war. 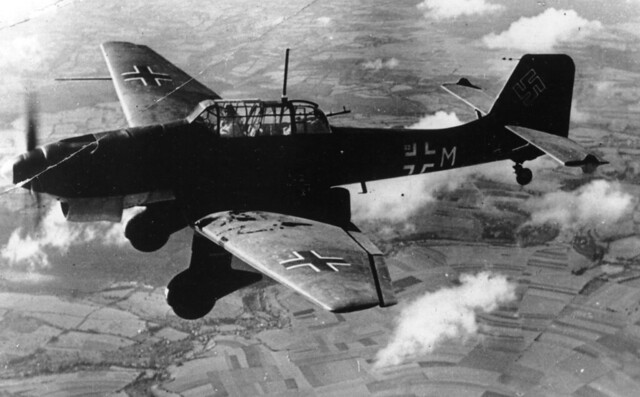 FILE – In this Nov. 1, 1940 b/w file picture a German dive bomber Ju 87 Stuka flies over an unknown location during World War II. German military museum is preparing to hoist the wreck of a Stuka dive bomber from the floor of the Baltic Sea, a rare remaining example of the plane that once wreaked havoc over Europe as part of the Nazis’ war machine. The Stuka wreck, first discovered in the 90s when a fisherman’s net snagged on it, lies about 10 kilometers off the coast of the Baltic island of Ruegen, in about 18 meters of water. German military divers have been working for a week to prepare the main body to be hoisted to the surface, and initial reports are that it is in good condition. The motor was brought up over the weekend. The German Military Historical Museum says it will be restored and put on display in Berlin. (AP Photo,File)

I had no idea that an instrument regarded as the key weapon in the Allied Victory – the top secret Norden bombsight – was manufactured at The Naval Ordinance Plant in Indianapolis. According to an article in weeklyview.net (“The Indianapolis Top Secret That Helped Win WWII”), “Indianapolis was selected because it was centrally located, it was a railroad center and was far enough inland that it could not easily be bombed by enemy aircraft.”

I’m glad that I didn’t learn this until about 70 years after I sat on my porch roof on Winthrop looking for Stukas – the deadly dive-bombers of the Nazis that terrorized civilians as well as Allied troops. It would have knocked the wind out of my patriotic pretensions. It might have even blown away my inspiration for the novel “Under The Apple Tree: A World War II Home Front Novel.”

A common question asked of writers (in addition to Who’s Your agent?) is “Where do you get the idea for a novel?” The best and clearest answer I can give is  the idea for “Under The Apple Tree.”

I was living in Boston in 1983 when I walked out one morning onto Charles Street (the main drag of Beacon Hill, a neighborhood that was still affordable for non-billionaires back then), and a picture came to my mind. It was the sight of a 10-year-old boy sitting on the roof of his house in the Midwest during WWII, looking through a pair of binoculars for the outlines of German and Japanese warplanes.

My God, I thought, if I could explain why a boy (who was not mentally deranged) would be occupied in such a way, I’d have a novel! Of course, I would have to think of a story to explain the boy’s activity. Then the hard part – I would have to write it.

I was the boy I called “Artie” in the novel, and I would tell the story from his point of view (which I could imagine since it was my own during that era.) I was 9 years old and a Cub Scout in Den #6, Pack #54 in Indianapolis when I heard that the Japanese had bombed Pearl Harbor, a United States naval base which (like most Americans) I had never heard of until that moment.

I heard the news over the radio while I was having a Cherry Coke in my father’s drugstore (Harbison’s, later Wakefield’s, Drugs) at the corner of 16th and Central. When the announcement was over, I climbed on top of one of the iron-back chairs onto a table (where people sat and talked while they ate and drank, before the age of computers) and I sang “America.” (I liked it better than “The Star-Spangled Banner,” and it was a whole lot easier to sing.) 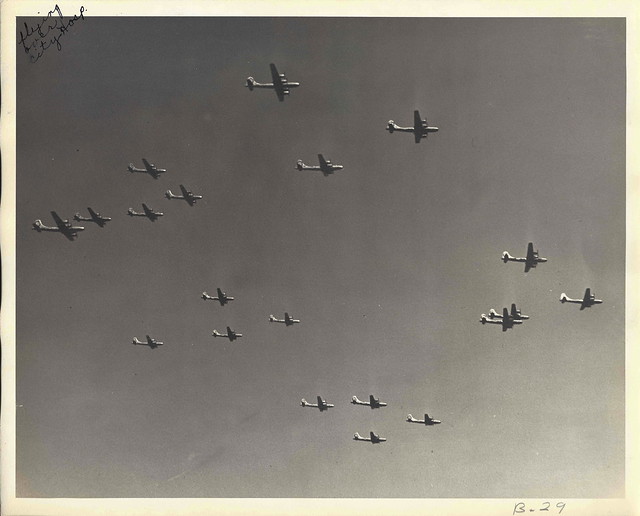 U.S. Bombers heading home over Indianapolis at the end of WWII

My cousin “Junior” (Clayton E. Ridge, Jr.) who lived next door in our double with my grandma Irene-y and was the closest thing I had to a brother (I was an only child) enlisted in the Air Force and became a tail gunner on a B-17. He had a girlfriend who went to Broad Ripple who my mother invited to dinner after Junior was sent overseas, hoping to keep up her morale, in the hopes that she would keep up Junior’s morale by writing him letters and not “sitting under the apple tree” with anyone else but Junior!

How that all worked out I never knew, but I could imagine. And imagine I did, making up the characters of Artie’s older brother “Roy” and his girlfriend Joanne (“Shirley”).

I didn’t want “Roy” to be a tail gunner like Junior which would have revealed a lack of creativity on my part, but I made him a Marine like a boy who lived down the block, and I sent him to the South Pacific. I never knew or heard of a 4-F guy like poor “Foltz” in my novel, but it always made me cringe when I heard the words to another popular war song, “They’re Either Too Young or Too Old.”

The lyrics were about how the pickings were slim for the girls left at home – the only guys left were either too young or too old, either too grey or too “grassy green”: the best were in the Army, what’s left will never harm me…Oh my God. Even as a 9-year-old, I could imagine what 4F guys – who were deemed physically or mentally unfit for the service – must feel, hearing those words.

The “harm” didn’t mean anything about physical abuse; it meant that females would find such a boy or man “harmless” in the sense of there being no danger of anyone wanting to go out with him, much less fall in love with him!

So I invented my love triangle by making up the character of poor old “Clarence Foltz” who was 4-F – I even gave him what sounded to me like a crummy name (as I would have called it in “Artie’s” lingo.)

So I had something of a “plot.” Now all I had to do was write the novel. That’s always the hard part. It was fun, though, to go to the Boston Public Library, one of the few with “open stacks” which allowed you to leaf through Time and Life magazines from the ‘40s and copy out passages and quote them as if “Artie” were reading them from those very magazines.

One thing I didn’t have to copy and read anything to remind me about – the amazing spirit of genuine patriotism of the war that brought our country and its citizens and soldiers closer and more united than we have ever been before or since or probably ever will be again as our wars become more fragmented and difficult to explain and understand with questions on every side about their necessity or validity or eventual effect. In those days, everything was clear-cut good against evil as “Artie” expressed it in his own words and feelings:

“In the crisp, clear days of October, America was beautiful, just like in the song. Artie had never been ‘from sea to shining sea,’ nor had he seen ‘the purple mountain’s majesty,’ but he knew they were out there, believed in them and saw every day with his own eyes the beauty of the gentle hills, the creeks and cornfields, the solid old white frame houses and the ancient oaks of Town.

“He believed in fact that God had ‘shed his grace’ on this land, that this grace was tangible, visible, in the arch of rainbows over wet fields, the slant of shed sunlight on the sides of old barns. His pride in his country was sustained by the signs of nature and the symbols of men, not only the bright stars and stripes that flew from public buildings and hung from private porches but the comforting, everyday emblems of home: Bob’s Eats, Joe’s Premium, Mail Pouch Tobacco.

“This was what Roy and all the other boys were fighting to save, preserve and protect, along with the people who were lucky enough to live in and of it, and all this was sacred, worthy of any sacrifice, including life itself. For without it, life would be hollow and dumb.”