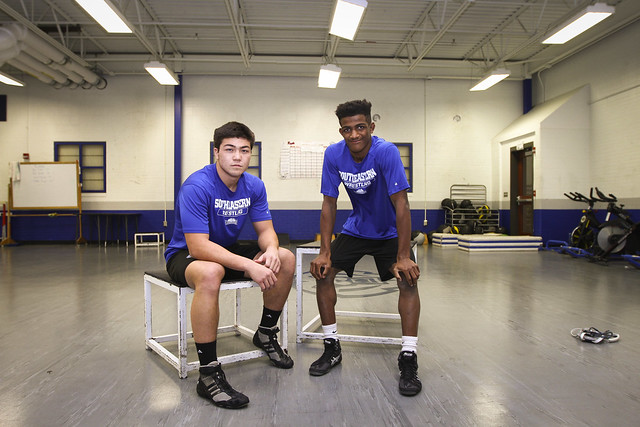 Both senior wrestlers Austin Holmes and Spencer Irick have worked for years to be where they are. Competing for the number one position in the state, the athletes plan to finish their last year on top before attending Indiana University to further their wrestling careers.

“I started wrestling when I was about 11 years old,” said Holmes. “I saw a dual meet between Iowa and Indiana University on the Big Ten Network, and at that point, I decided that I wanted to try wrestling. I also decided I would eventually wrestle for IU because I soon realized that my dreams of playing middle linebacker for IU would probably not come true.”

Holmes and Irick are both state-ranked athletes with numerous titles and accomplishments, including Holmes’ win in the state’s most difficult tournament and Irick’s Academic All-State title. But for the athletes, these accomplishments came with years of hard work and dedication.

“The most difficult aspect of being a wrestler is the rigorous practice schedule and time management,” said Irick. “Everyday, I am pushed to the point of exhaustion, but in order to be the best, you have to work the hardest. Practices are every day lasting around 2-3 hours, and I have to manage my time wisely to succeed on the mat and in the classroom.”

As for the future, both seniors are signed to Indiana University for wrestling. But for now, they are focused on State.

“I don’t set my goals anymore; I just put the expectation in my head that I will win my next match,” said Holmes. “My expectations for myself are winning a State Championship and winning the NHSCA Senior Nationals this spring. I have already signed to wrestle at Indiana University next fall, and I would like to win as many opens as possible my redshirt year. Then after that, I would like to be an NCAA All-American for IU.”

Lady Tigers’ Kara Gerka yet to be ...

Painting With a Twist Opens in Fishers