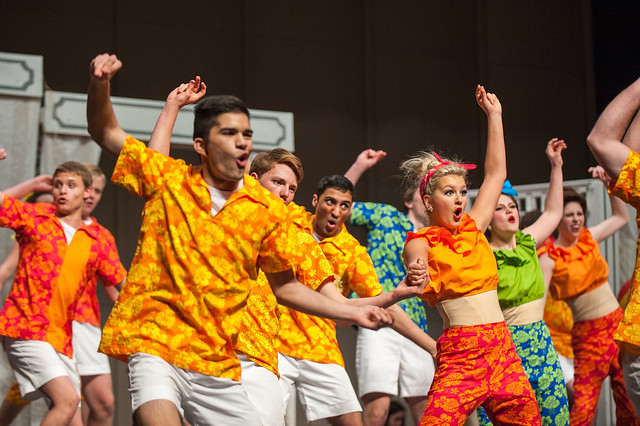 Once again, Zionsville showchoirs managed to bring home the bling with a successful 2015 competition season, after completing an undefeated season last year. Together, 138 students participated in Royalaires, Choralaires, Combo and Crew, including 50 seniors!

But let’s not take being at the top of the heap for granted. Many hours of hard work and dedication on behalf of directors, students, and numerous parent volunteers are what amount to regular accomplishment. Add to that, clever arrangements and carefully designed costumes and choreography, and you have the recipe for success. This year’s three competitions saw two first place trophies and one runner-up trophy for each showchoir, with other notable awards that included Best Crew, Best Combo, Best Show, Best Vocals and Best Visuals. For Choralaires, this season is about “Defying Gravity.”

Starting out in the early Pan Am-era of flight, the 56-count, all-female choir takes the audience on a journey that ultimately ends in space. With an airplane hangar as a backdrop, the group delivers numbers that suitably include Sinatra’s classic “Come Fly With Me” and an Andrews Sisters-style rendition of “Rosie the Riveter” before senior soloist, Christiana Lopez, helps make the transition into space with a beautifully performed excerpt of “Explorers” by the English rock band, Muse. 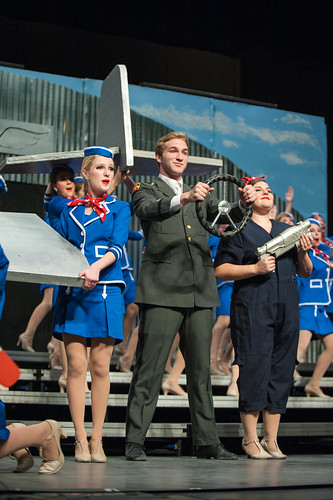 Blue-suited flight attendants then morph into intergalactic travelers, wearing green, blue and pink neon wigs and shiny silver dresses. The backdrop changes to match the futuristic theme, and the audience is treated to a new era of music that includes Peter Schilling’s “Major Tom (Coming Home),” “Cosmic Girl,” and “Starships.” Of course, the show aptly comes to a conclusion with “Defying Gravity” from the Broadway show “Wicked.”

Here and there, director and arranger Aaron Coates sneaks in snippets of other air and space tunes, including “The Air Force Song” (“Off We Go the Wild Blue Yonder”) and “Twinkle, Twinkle, Little Star,” stretching for every inch in the show’s theme. Costuming for both shows is exquisite! The pieces were designed by Coates and Deana Broge, then brought to life by Satin Stitches, a company out of Minnesota who specialize in custom performance wear.

Adalyn Schillaci, mother of a son in Royalaires and a daughter in Choralaires, is past president of Zionsville Showchoirs, Inc. (ZSI) and the current chair of the five-person committee that, together, altered and maintained the stunning 268 outfits worn in this year’s shows. “As a group we conducted the fittings, attended all dress rehearsals and were present at each competition to tackle any costume issues!” she said.

The Royalaires’ stage production transports us back to earth and the early 1920s where we nostalgically experience “Sundays By the Sea.”

The scene is set in sepia tones with a hint of lavender: long dresses, bonnets and parasols for the ladies; jackets, vests, bowler hats and skimmers for the men.

Aside from perhaps one number, the first half of the show is a selection of Broadway tunes, including numbers from “Ragtime,” “Titanic,” “Hello Dolly” and “Sunday in the Park with George.”

Then with a quick change of costumes, things take on a less serious note. In black-and-white striped, old-fashioned swimsuits, the men do a Gene Kelly song-and-dance number, “I Love to Go Swimmin’ with Women” from the 1954 movie, “Deep in My Heart,” followed by the entire cast’s rendition of “By the Beautiful Sea,” from the musical “For Me and My Gal.”

A brief barbershop quartet catapults the show to the finish line with a nod to the Beach Boys, replete with beach balls and surfing – yes, surfing! Thoroughly entertaining from start to finish!

You can catch both showchoir competition sets at Finale on May 15 and 16 at the Zionsville Performing Arts Center. In addition, you will see the fall show and several new numbers. Tickets go on sale to the public on April 20. Go to ZChoirs.com for more information.