It has been said that you never know how strong you are until it is the only option you have. This saying could not be any truer for Center Grove native, Brooke Van Paris. It took a near-death experience for her to find her own strength and inspire countless others around her.

ACTIVE BEGINNINGS
Growing up in Center Grove, Van Paris was active as a child and gave her all to whatever she did, sports and school. She played softball with the Center Grove Lassie League and basketball for the Center Grove Recreation League. She golfed for the Trojans, cheered as a freshman and ran for the track team. She also competed in gymnastics with Perfect 10 and continued to participate in gymnastics into college.

Van Paris started at Indiana University in the fall of 2008 on a full-ride scholarship through 21st Century Scholars. She lived on campus and enjoyed the new transition in her life. “I was involved in club gymnastics, in the Kelley School of Business, living with a random roommate in a dorm of all strangers, eating the cafeteria food and trying to figure out life away from my parents.”

SUDDEN TRAGEDY
Life suddenly changed the evening of October 29, 2009. Van Paris had finished her classes for the day and was heading home. She entered a familiar intersection under a stale green light when she was hit head-on by another driver. Her car did two full 360-degree turns, all four of her tires blew and the windshield shattered.

“I opened my eyes and saw smoke billowing out everywhere and heard a sound — the sound of my own voice — my own screaming that was almost uncontrollable,” said Van Paris. “My body went into fight or flight mode, and all I could think about was getting out of my car. But we had a problem. When I tried to get out of my car, I realized I was stuck. My engine had broken off its engine mounts and came into the car just enough to cause my pedals to wrap around my feet. I slowly slid my feet from my shoes and escaped, falling into the arms of strangers while I screamed and cried at the accident.”

It took her only a few seconds to realize that the accident had completely shattered her hands.

“My body’s defense had balled them up into mangled looking fists to prevent me from using them any longer, and I shrieked at the horrific sight. My hands, both of them, were a mangled, disgusting, painful mess.” 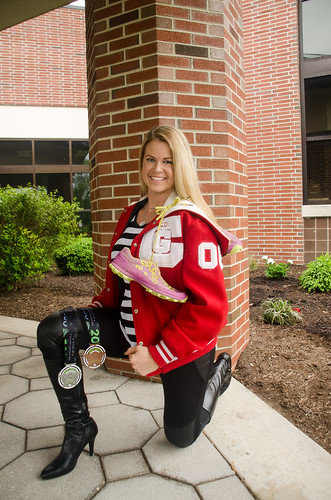 THE AFTERMATH AND RECOVERY
For the next four years, she had a series of four surgeries every six months which included re-breaking her hands and using internal and external pins, plates and screws. She was without the use of her hands for two years, and as a result, she needed help with even the simplest of tasks.

She threw all of her focus not only in recovery but also in the one constant in her life: her education. For Van Paris, staying out of school was never an option, and she was adamant that she could do it fulltime with the use of voice activated software.

“I did this because I had set my mind to it. I wasn’t going to give up, and that is something that still holds true today.”

She graduated in 4.5 years with a management degree from the IU School of Public and Environmental Affairs and a certificate in business foundations.

Van Paris found herself discouraged, living a sedentary lifestyle. As a result, she completely lost any muscle mass and gained 40 pounds.

“This person was someone I had never been before. I was living in a body that was not mine. It felt foreign to me.” She needed to reinvent herself and keep fighting. “There was a reason I did not die in that accident that day, and I swore to myself that I would fight until I found out.”

BECOMING A COMPETITOR
After much pushing from a friend, she signed up for her first obstacle course race in October 2014 with zero experience. That first race was a struggle, but as she crossed that finish line, she was hooked and went on to do 48 more races. One year later, she was competing in the Obstacle Course World Championships representing the USA.

Van Paris also goes by the nickname, Beast Mode Barbie. “Although I look cute and innocent, I am a force to be reckoned with on the race course. I am a very fierce competitor — not afraid to get muddy and dirty, not afraid to do what the boys do and try to do it better.”

“These races are personal. For me, it wasn’t about beating the person next to me; it was a race against myself. I would set out on a mission to do my personal best and to always make it across both the start line and the finish line. To never give up.”

AMERICAN GRIT
That fall, she was approached about the opportunity to compete in the reality show “American Grit” where 16 elite athletes competed in teams of four doing military-inspired evolutions with the goal of winning up to $1 million.

Hesitant at first, Van Paris decided to “let go and let God” and booked her tickets.

“I decided that God wouldn’t put this opportunity in my life if I wasn’t supposed to take it, so I packed my bags and headed out to L.A. for a week,” said Van Paris. “Coincidence or not, but it was actually the six-year anniversary of my accident while I was out there.”

She was chosen to be one of the elite and found herself traveling to Eatonville, Wash., that November.

The challenges were mainly physical. Upon arrival, they repelled off a bridge and carried ruck bags filled with sand over trials of elevation change until they reached the house where they stayed.

The first event was called “Ruck Up” where all four members carried a 120-pound log on their shoulders while going through a 3.6 intensity obstacle course. 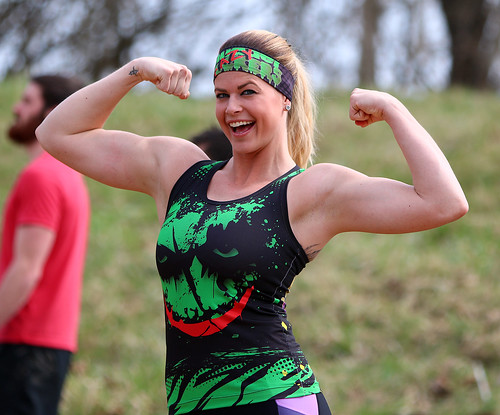 The “Circus” event took one person from each of the three losing teams to test their “never give up” attitude. It started with a series of 13 obstacles and ended with an endurance event. She was chosen for the endurance event which she said was easily the most grueling thing she has ever done in her life.

The event was an ice bath challenge. Competitors were to submerge themselves completely into an ice bath, get out of the water and do 10 burpees, repeating until one gave up.

So that cold November day in Washington, topping off at around 25 degrees, she harnessed her “can-do” spirit and jumped feet first into the event with her teammates cheering by her side.

“By about round six, I couldn’t hear anymore. I started becoming delirious, but I kept coming back to the mental images of my accident. If I could get through that, I sure as heck could do this, so I kept pushing and dunking in that freezing water.”

Mentally, Van Paris refused to give up, but her body could only take so much. At round nine, after completing her 90th burpee, she crashed to the ground completely unconscious. She had gone into hypothermia.

“The entire time, I could feel people touching me and hear people talking to me, but I could not get a word out of my mouth in response and never could move any muscle.” Paramedics searched for 30 minutes before finding a vein, and she was not able to speak for an entire hour.

LIVING LIFE TO THE FULLEST
The event was traumatic, but Van Paris has absolutely no regrets. “I held true to my life mantra, and for that, I am at peace. I can hold my head high and have no regrets because there is nothing else humanly possible I could have done to change the outcome. My mind was still fighting even when my body could not.”

She carries that “never give up” mindset with her daily.

“When you never give up, when you put every last drop of effort out on the table and give something, everything you physically have, you can hold your head high and live with no regrets, knowing you could have done nothing more.”