Local Treats on the Move

The food truck trend has traveled to Johnson County. Now that summer has arrived, you can find these vibrantly colorful vehicles at local events such as Bargersville’s Parks Department Concerts, Franklin’s varied events on the Square and Greenwood’s Freedom Festival in Craig Park.

Whether they are actual converted delivery trucks or retrofitted trailers, the entrepreneurs in them take pride in serving up their own unique culinary specialties. Our hunt for local restaurants on wheels yielded some delicious discoveries that we are pleased to share. 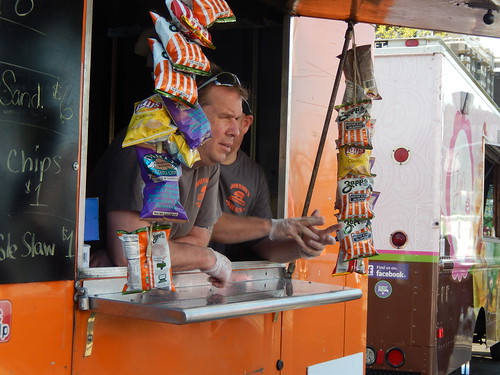 Where There’s Smoke, There’s … Johnson’s Bar-B-Que Shack
Low and slow are the keywords here. Brothers Keith and Nate Johnson’s hobby of smoking turkeys for the holidays led to their custom-built smoker on the back of a 24-foot trailer. Now family and friends help them serve up heaping mounds of impossibly tender meat to eager customers who line up to sample not only barbeque sandwiches but also smoked turkey legs, Texas hot links and boneless pork chops.

Nate’s wife, Heather, recommended the pulled brisket, saying, “It turned out really good tonight; it just fell right off the bone.” We followed her suggestion; in addition, we ordered the pulled pork. Slathered with their signature sauces, each bite confirmed that the 12 to 15 hours of cooking time is well worth the wait.

Also available are sides such as baked beans, cornbread and baked potatoes, cooked in the smoker on an iron skillet. Keith explained that they roast everything over flaming hardwood, which gives their food a “much smokier taste” than other barbeque establishments.

Currently working on opening a brick and mortar site at 82 S. Baldwin St. in Bargersville, the Johnsons are looking forward to selling their special smoked goods to customers long after the food truck season is over. 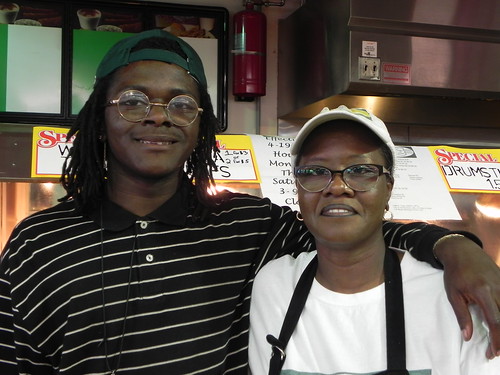 Harmon explains, “I make sure people get the real catfish they want and not Asian Swai [which is native to Southeast Asia] and might be sold at other places.” Everything is made fresh on the truck, and the sides of her signature multicolored coleslaw and cheesy baked spaghetti were also delicious. A word to the wise — get the scrumptious peach cobbler or delectable banana pudding before it sells out.

Noticing our obvious enjoyment while munching on her food, she smiled and said, “My food tastes like no one else’s.” Retired after 25 years with Yum! Brands Inc., Harmon used her savings to purchase a brand new trailer and all the equipment needed to make an actual kitchen on wheels.

She admits that what she is doing now is “more fun” than being in the traditional restaurant business, but she never thought she would have a food truck. When she is not in the truck, she maintains a space inside the Citgo Gas Station at 10005 E. 42nd St. in Indianapolis. 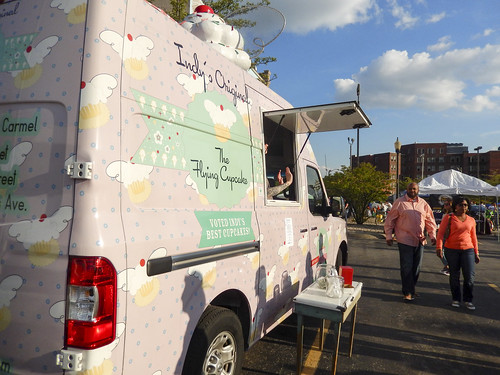 Have Your Cake and Eat It Too … The Flying Cupcake
There is no actual baking or cooking going on inside the charming Flying Cupcake truck, but frankly when the wares are this yummy, who cares?

Voted Indy’s Best Food Truck for the last two years and Indy’s Best Cupcakes for the last eight, the cupcakes served from their truck are baked at their Carmel location. Customers with a sweet tooth have their choice of the vast variety from the “Flavor List.”

According to Jessica Edwards, an employee, the all-time best-seller is Red Velvet Elvis, but a close second goes to Happy Birthday to Me that come in both vanilla and chocolate flavors. Currently The Flying Cupcake has two trucks on the streets named Petunia and Penelope.

Can’t wait for the enchanting truck with a winged cupcake on top? No worries! You can find the same jumbo-sized cupcakes at their Greenwood storefront at 789 U.S. 31 North. 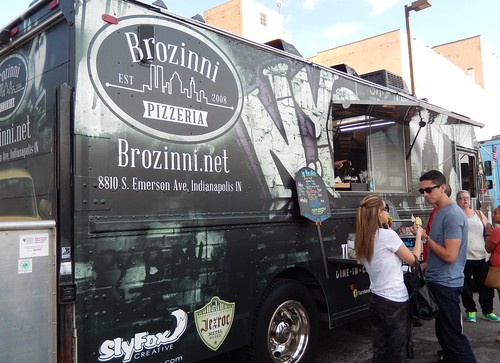 It is hard to miss this large former linen delivery truck with images of the New York skyline on the sides.

Inside, they make the dough and pizza sauce from scratch and even freshly grate the cheese as each pizza is made. We sampled a huge slice of multi-topping pizza and agreed it was fabulous. The killer crust and the gooey melted cheese are a result of the pizza actually being baked on the truck instead of made off-site and then reheated.

They upgraded to their current truck because they loved taking their product out on the streets, but to make it genuine, they needed real pizza ovens on board. Molly Wallace, who handles the truck logistics, said that until they added air conditioning and tweaked the ventilation, “It got pretty hot in the kitchen!”

Their mobile pizzeria has almost eliminated the need to advertise their location on the border between Indianapolis and Greenwood at 8810 S. Emerson Ave. Customers claim it’s the great food truck pizza that sends them there. 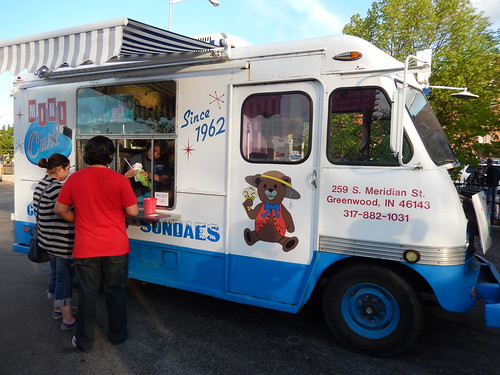 Blast from the Past … Mrs. Curl
The sweet frozen treats attract the younger set, while memories of the neighborhood ice cream truck draw an older clientele to Mrs. Curl “Mini Curl” truck. It was originally a 1959 Mister Softee truck from New York. Brozinni Pizzeria used it for a time and then sold it to Mrs. Curl.

Ashley Miller, who drives the truck, said, “It was like it was made for us.” The brightly painted blue and white vehicle plays nostalgic songs from the ’50s and ’70s as it roams the streets of Greenwood. The truck stays close to Mrs. Curl Ice Cream Shop at 259 S. Meridian St. and is also seen at community events.

Mini Curl has a limited but popular menu of soft serve ice cream, shakes and sundaes. Miller related how that at the end of last year’s season, the reverse gear went out on the truck.

Not wanting to disappoint anyone, the ice cream truck kept all its appearance commitments but either had to park in pull-through spaces or be pushed out in neutral at the end of an event. Miller said proudly, “We still came, and everyone got their ice cream!”

Have the Event … and They Will Come
As summer goes on, the list of food trucks that appear at local events is sure to grow. When they pull up, people can’t help but be attracted to the novel and relatively inexpensive fun food offered.

Food trucks are a diverse group with an intense pride for their unique products.