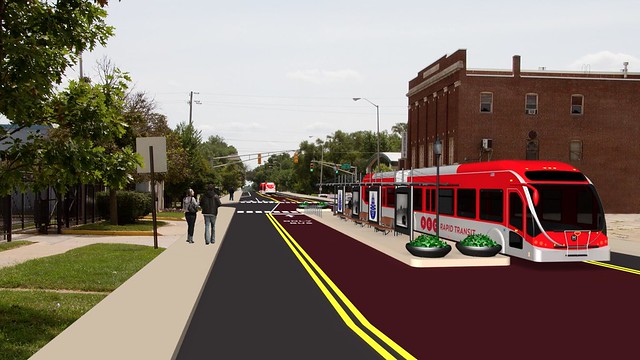 A more ambitious public transportation system for Indianapolis has been on the table and in the headlines for years, but plans are finally coming into focus, and city officials are sharing the details with Broad Ripple and other areas that will benefit from a new rapid transit service.

The 35-mile Red Line will run from Westfield and Carmel to Greenwood through Indianapolis using fully-electric buses driving in dedicated lanes. The route will use College Avenue and is planned to include stations at the Indianapolis Art Center, Broad Ripple Avenue, Kessler and 54th Street.

IndyGo officials note that the Red Line will bring a new kind of frequent, convenient transit service to neighborhoods like Broad Ripple along a heavily-populated, heavily-traveled corridor.

“More than 100,000 residents live within a five-minute walk of the future Red Line route, along with one of every four jobs in the city,” noted Bryan Luellen, Director of Public Affairs for IndyGo.

“We want to help people get to work, but we also want rapid transit to connect our recreational and cultural destinations,” Luellen added. “The Red Line will eventually help people from across the region – from Carmel and Westfield to Greenwood – enjoy Broad Ripple without depending on their cars.”

Luellen noted that the opposite is also true – the Red Line will put Broad Ripple residents just minutes away from the Carmel Arts and Design District and Westfield’s Grand Park or south to the heart of downtown, Fountain Square, and on to Greenwood. While bus rapid transit will help commuters ease their daily grind, it also provides a more convenient connection to the Children’s Museum for families, Lucas Oil Stadium for Colts fans and much more. 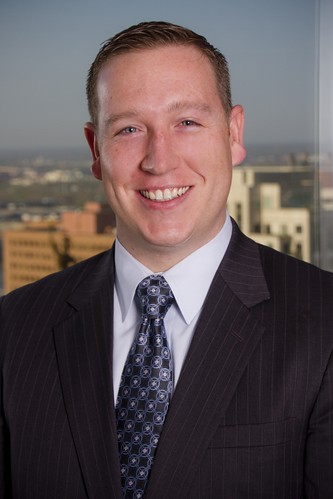 Mark Fisher, Vice-President of the Indy Chamber and a member of the Mid-Town Indianapolis board of directors, believes that Indianapolis is long overdue for rapid transit service like the Red Line.

Bus rapid transit (BRT) service like the Red Line has been embraced by many cities across the country, said Mark Fisher, Vice-President of the Indy Chamber, which has pushed for the Red Line and the broader ‘Indy Connect’ plan for regional transit.

“BRT is a really efficient way to implement rapid transit with many of the same benefits – at less cost – as light rail,” Fisher said. “Indianapolis is really overdue for this kind of service.”

Fisher also served on the board of Mid-Town Indianapolis, the coalition of neighborhood associations that includes Broad Ripple, Meridian-Kessler and others. He sees BRT bringing new customers to local businesses, encouraging new development and raising property values along the route.

“In Cleveland, the Health Line bus rapid transit project has led to nearly $5.8 billion in new economic activity since 2008,” Fisher said, noting that the Red Line has similar potential based on current population and employment.

This is NOT THE AREA- too congested

I have lived at 5827 Broadway St. for 30 years come this next November 26th. I am vehemently opposed to;

1) the proposed 6 story apartment building. There is not enough traffic space and usage for 200 more people and 400 more cars on that corner. That is overkill. It will be in my backyard, eliminate my privacy giving a six story view of my life. Deter access to my driveway and garage, not to mention rid my 30 long garden of the sunshine I have always had. I have an easement for that.

2) any alley access at all from the proposed apartment complex or Redline facilities. School children walk through there to get to and from IHM and CFI 84. Dogs are walked and people exercise.

3) any Redline proposal to divert traffic through to Central Ave. via 57th or 58th Sts. Once again children and family life abounds in this area. That is why we live here.

4) any TIF funds used for this project. Once again, people and corporations that want “less government” are always there for a handout. Get your own money from bank or investment finders. NO FREE MONEY TO CREATE NOTHING BUT THEIR OWN WEALTH, not jobs!

Basically we don’t want you here.

This sort of makes me laugh. To invite “Carmel to Westfield to Greenwood” to come to Broad Ripple to enjoy…. Did anyone notice that BR is very small. Unfortunately mostly bars and restaurants now as well. That is insane. I also can pretty much speak for most of MKNA…. We are not really at all interested in going to the manufactured arts district in Carmel. That is why we live here. I never do it now..,. And I certainly would never do it if I had to walk to a station in the cold or snow or heat…. With my kids to busy College Ave… Then pay a fare then stop multiple times etc. this entire thing is ridiculous and as we if MKNA have recently found out…. Very sneaky.

Building a Legacy While Building Up Communities | Carmel |
Reply

[…] mass transit has been a controversial topic of conversation, particularly since the proposed Red Line is projected to run through Midtown and other areas of the […]