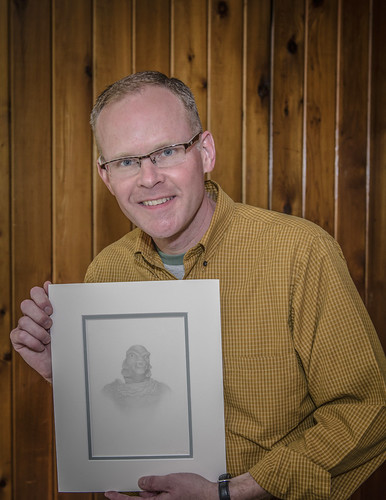 Typically, when people hear the term “portrait artist,” they envision the subjects to be of the human persuasion. However, this is not the case for portraitist Kris Mobley; his subjects are 9-inch tall plastic toy monsters.

“A few years ago, I had the idea for this project and looked online for the toys. I have memories of them from my childhood, my brother’s toys and mine strewn around the bedroom,” he said. “I found a Creature from the Black Lagoon up for auction on eBay. It was about $1,000, so I didn’t buy it, but I saved a copy of the photographs to my computer,” he said. “There was something I found to be narrative and wistful in that plastic face.”

From Pigs to Portraits
Though monsters are his current project, Mobley did not set out to be a toy monster portraitist. Far from it, in fact. In his earliest memories, his interest in art originated at home and with the drawing of a pig. “It all sort of began with my mother. She taught me to draw to keep me busy. But all she knew how to draw was a pig … so we would draw a pig over and over again,” he said.

When he tired of pigs, he learned to expand his capabilities with help from his brother and dad, moving on to dinosaurs and eventually to what would become his first love: comic books. “Comic books are where I focused the most of my energy. From a young age, I really just wanted to be a comic book artist,” he said.

After a stint at the Art Institute of Chicago, he drifted for a while, still desiring to work in comic books. About a year later, he landed what he thought would be his dream job, going to work for Stratia Studios in Cincinnati, Ohio. However, after a time, he felt a pull away from the beloved genre.

“As an adult, I became a Christian. I became more interested in my spiritual walk, and I had trouble reconciling all the violence in comic books … even in Christian ones,” he admitted. “Focusing more on spiritual matters by then, I went to Bible college for a couple years. During that time, comics, the only subject I was much interested in drawing before, became less important to me … so drawing kind of did too. I still felt the talent was there though and wondered sometimes what it was I was supposed to do with it.”

However, a pivotal conversation set him back on course and directed him on the path he should be going. As Mobley lamented to a co-worker and friend, that friend turned the tables on him and pointed out, “You’re always talking about art.” Mobley knew he needed to jump back into his drawing. “He woke me to giving art a renewed, serious go. From what he said, he’d seen it in me all along,” Mobley said.

Working predominantly in pencil, he began by drawing portraits. First drawing from photographs of his favorite authors, such as F. Scott Fitzgerald, and then moving on to some commission work, Mobley gained more experience.

“I love teaching young artists,” he said. “It’s exhilarating when it’s clicking for them, but when it’s not, it’s difficult. I love to give them lots of ‘tools for their toolbox’ … some of which might work right away, and others they might pull out in the future when their other standard techniques aren’t working on a particular piece.”

As years passed, however, the time spent in traveling to and from the Indianapolis Art Center as well as other stresses began to take their toll, so Mobley began looking for his next project. And that’s when he turned his attention toward the monsters.

“This began just as a personal project for me,” he said. “The Creature idea first crossed my mind maybe four or five years ago, but I left it in a file where a lot of my ‘maybe someday’ ideas go. I took it up for a real try two years ago though, and the idea for an ongoing series based on all the monster figures grew out of that.”

Marketing the Monsters
Nevertheless, the idea has blossomed into so much more than simply drawing the series. As Mobley has discovered, there is an audience of toy collectors who are clamoring for prints of his toy portraits. “I never thought I would do this with it,” he said. “Collectors are asking me to let them know when the prints are available.”

However, Mobley’s true motivation is beyond sales. ”The commercial idea behind this project is to interest a popular audience in fine arts drawing. I really wrestled for a long time with the ‘illustrator versus artist’ question, and questions of aesthetics and artistic integrity still deeply matter to me. I like the toy monster series as it remains a part of that investigation, allowing me to work in a deeply personal way on a relatively popular subject,” he confessed.

The scope of the project will include the six monsters in the REMCO’s Official Universal Studio’s Monsters toy line. So far, Mobley has completed Creature from the Black Lagoon and is presently working on Dracula. The remaining four horror characters in the series are Frankenstein, The Mummy, The Wolf Man and The Phantom of the Opera.r

Rebuilding From Rubble: A Trip to Nepal