The Popular Pizzeria has Paired with Quaff On! Brewing Greek’s Pizzeria is back in Broad Ripple, this time in SoBro, and is tapping into the local Indiana beer scene with an added taproom featuring Quaff On! Brewing, along with other local breweries. Located at the corner of 49th and College, Greek’s shares one side of the building that used to be owned by the Bottle Shoppe.

Greek’s franchisee Josh Trisler is excited about the new location and addition of the new taproom.  He used to run the Greeks, which was formerly located in the heart of Broad Ripple off 64th and Guilford Ave, and thinks this new location will attract more people.

“Most SoBro people tend to not travel into Broad Ripple, but Broad Ripple people will travel to SoBro,” says Trisler, explaining why his former location didn’t have a consistent flow of people. “This location is a perfect blend of both worlds because I can still reach the original audience plus reach more people that I don’t think went to our Broad Ripple store.”

The approach to have Quaff On! featured in Greek’s new taproom came oddly enough from cross-country. The owner of Quaff On, Jeff McCabe and Trisler both attended Carmel High School (at different times) and also had the same cross-country coach. It was their former coach that connected the two.

“He was like, ‘you have pizza, and you have beer. You guys should talk,’” Trisler says.

Both men still love to run, eat pizza and drink beer. The taproom heavily features Quaff On!, but also features other local beers as well.

The new location takes over the 2-story building that was mainly used as storage for the Bottle Shoppe with a traditional pizzeria room, named “The Bunker” that can hosts families downstairs. The upstairs, or “The Vault” is really what makes this Greek’s special. The upstairs Vault is a 21 and older taproom that has around 15 taps but also adds a fun experience starting at the hallway that leads you upstairs.

The hallway, dark, painted with neon paints and lit up with black lights makes it look like you’re about to walk into a laser tag game rather than a tap room. The stairs are covered in vintage Indiana License plates all cleverly with the year 1969, paying homage to when the original Greek’s opened. 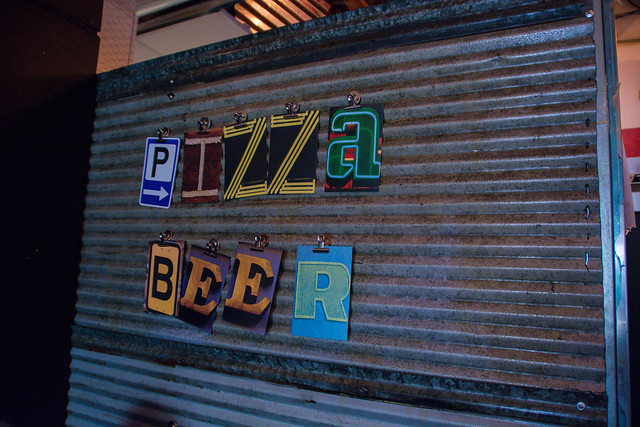 When you get upstairs its like you’ve traveled into an eclectic vintage wonderland with various old tools, beer cans, army men and other nostalgic items adorning the walls and ceilings.

“Our whole philosophy when building was to spend as little money as possible,” Trisler says. “The people who own the Bottle Shoppe, have owned this building since the 1950s, and when we took it over there was all this old stuff everywhere and it was so cool. Just a relic of everything they’ve ever done.”

So what do you do when you have a bunch of vintage stuff and need to decorate a space on a budget? Decorate your taproom like the popular video game “Fallout” obviously.

“As we were building [the taproom] we noticed, ‘Man this is kind of like Fallout,’” Trisler says. “So, we wanted to pay homage to the game without going full on Fallout. We learned that the term is retro futurism.”

And that’s exactly what the Greek’s taproom looks like. It pays homage to the past with $30 worth of rusty wrenched placed in a purposeful pattern on the wall but also has a giant vintage bomb they found on Craigslist hanging from the ceiling that definitely makes this place feel like a fallout shelter. People who are fans of the game will see the subtle nods, and the clever found art murals will still entertain people who aren’t.

“It was fun because I was literally driving around the city collecting stuff. Everything random buts nothing is random.” Trisler says.

Greeks had their official Grand Opening on June 22nd but had been quietly running for a little over a month before to test the waters and get ready for the big day. The neighborhood has definitely noticed.

Trisler says that before they had even opened, people were knocking on their door to see what was going on. It’s hard to ignore a new place when there’s a coat of bright red paint on the building. Even though there was storms predicted the day of the official opening, Greeks had the parking lot blocked off for people to hang outdoors with live music.

With all the new places popping up in the neighborhood, the new Greek’s seems like the perfect fit for Broad Ripple. With a local pizza business adding a taproom with local beer, the whole space is a fun celebration.

Greeks Pizzeria and Taproom is located at 700-716 E 49th St and shares a paring lot with the Bottle Shoppe. You can also find them online at greekspizzeria.com.

It's nice to have Greek's in the MERIDIAN-KESSLER neighborhood adn giving a face-lift to that grimy Bottle Shoppe. That being said, I must correct something — the mythical place people call "SoBro" doesn't actually exist. Greek's is NOT back in Broad Ripple, it's in the Meridian-Kessler Neighborhood. It seems with the author being a native of BR, she should know the boundary lines, but people are always trying to include our neighborhood in the BR area to try to class up the village. BR ends at Kessler Blvd as their south border which is 10 blocks north of the new Greek's location. Josh is correct, we Meridian-Kessler residents are reluctant to go into BR as it's not the neighborhood for shopping and strolling about it was years ago. Also, as an IU Journalism grad I would think the author would proof read as this article is laden with grammatical errors. All I wanted to do is get out my red pen.