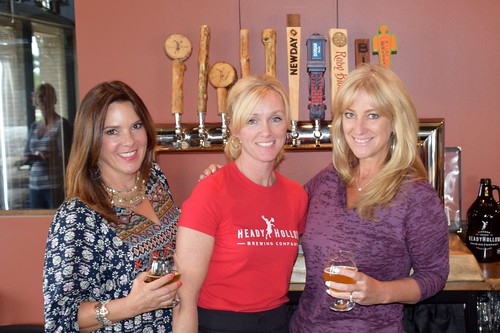 Who knew a trip to the Sam Adams brewery in Boston eight years ago would lead to a passion for brewing and the opening of a new microbrewery in Fishers? But that’s exactly what happened to co-founder Keefe Pietri!

He was never much of a beer fan, but that Boston trip changed his opinion. Of course, it also could have been the college years of drinking Old Milwaukee or Red White & Blue that affected his low opinion of beer!

After he returned from his trip, he started tinkering around with different recipes and brew kits in his kitchen. He’d bring his concoctions to co-workers and friends to get their opinion. One of these taste testers was George Garrison. George also found he enjoyed the process of brewing beer.

Keefe and George spent endless hours and years together perfecting their product. After winning the Indiana State Brewer’s Competition at the state fair, they knew they had tapped into something special. The two began planning to open up their own microbrewery.

With a plan to emphasize the microbrewery’s Fishers roots, Pietri and Garrison began scouting out a home for their craft beer. They found a space at the end of the Village Square strip mall on Allisonville Road south of 116th Street.

Local legend has it that the area just north of this location was once known as Heady Hollow and was said to be haunted. An old Mennonite record from the 1850s warned travelers to beware of the screams and moans of ghosts in Heady Hollow. With such interesting folklore, the co-founders couldn’t resist naming their new establishment Heady Hollow!

From the décor to the names of the microbrewery’s offerings, the owners have cleverly woven Fishers’ past and folklore into their establishment. Pictures of the early days of Fishers adorn the walls. The barn wall in Heady Hollow comes from a former local structure. The tabletops are repurposed beams. There seems to be a story to everything you see in Heady Hollow. Their attention to detail adds to the bar’s charm. 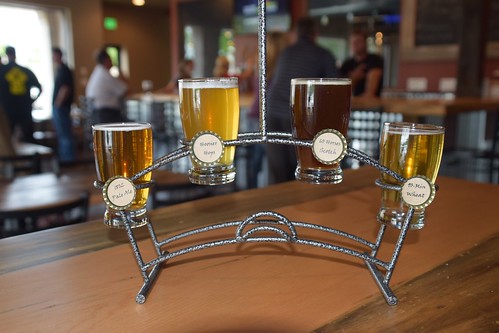 Heady Hollow offers four regular beers on tap along with a few rotating seasonal offerings. The 1802 Pale Ale is named after the year Fishers was founded. It has an amber color and was the beer that won the co-founders brewer’s contest. Hoosier Hops is an India Pale Ale. This IPA has a less hoppy and more malty taste than other IPAs we’ve tried.

For those of you who have visited Conner Prairie, you may remember the story of William Conner and his wife, Mekinges Conner. The two went on to have six children, but 18 years later, Mekinges and their six children headed west with 60 horses and William stayed behind. Heady Hollow’s 60 Horse Scotch Ale is named for that tale. By the way, don’t feel too badly for ol’ William. Three months later, he married an 18-year-old, and they had 10 children together! Yet we digress.

The fourth brew is an American Wheat named 90 Minute Wheat. The four beers have an ABV (Alcohol By Volume) ranging from 4.7-7.6. For comparison’s sake, a Coors has an ABV of 3 percent. So look out – these drinks can hit you pretty fast!

Coming in October, Heady Hollow will be offering a Harvest Ale. It’s a smooth brown ale with hints of orange, ginger and cinnamon. They also plan on adding a pumpkin ale for October. Thanks to Heady Hollow, there will be plenty of treats during this trick-or-treat season!

Of course, what’s beer without some munchies? Heady Hollow has you covered there too! Lauralee Pietri has used her experience in the food industry to come up with a menu that will make you want to come back for more!

Even if you aren’t a beer lover (yes, there are some of them out there), you’ll want to come in to enjoy the paninis and sandwiches. Our favorite was the barbecue pork sandwich. The vinegar-based coleslaw added to the yum factor! They also stay local with their food. Carmel-based Just Pop In popcorn and Broad Ripple Chips are a few of the munchies they offer.

This fall, they will be adding growlers to their menu. So if you like what you taste, you’ll be able to take it home. Heady Hollow is in the process of building up the inventory that will be needed for the addition of growlers. It takes about three weeks to brew a batch of beer. They will be announcing on Facebook and Twitter when they are ready to begin offering growlers.

In the meantime, consider trying a flight of the Heady Hollow’s four flagship craft beers. It’s a great way to sample all four beers!

Heady Hollow is located at 11069 Allisonville Rd. They are open Wednesday and Thursday from 4-10 p.m., Friday 4-11 p.m. and Saturday from noon-11 p.m. They are closed on Sundays and Mondays. If you’re looking for some craft beer with a local spin, head over to Heady Hollow. CHEERS!

The Perfect Partnership – Brad and Carey ...

The Power of Body Language