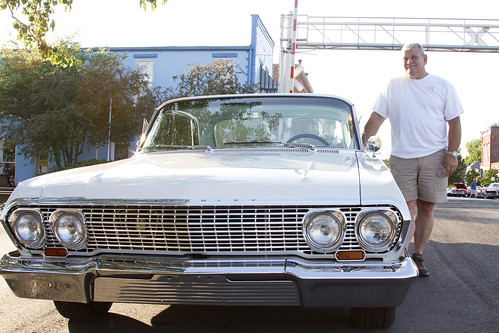 George Wanamaker, a Geist resident, helped start the Wednesday night cruise-in on Main Street in Fortville. He stands with his 1963 Chevrolet Impala that his wife “won’t let him sell.”

On any Wednesday night during the summer months you’ll find classic cars parked on Main Street in Fortville. It’s called a “Cruise-In” and it attracts over 70 classic cars, trucks and roadsters to a town that is also a throwback in time.

Wanamaker, who frequents several cruise-ins with his 1963 Chevrolet Impala, was reading the Geist Community Newsletter back in the summer of 2012 when he saw an article about the new Indulge Ice Cream Parlor. After visiting, he contacted the Town of Fortville and a grassroots volunteer group, the Fortville Action Committee, was founded to bring life back to the town. 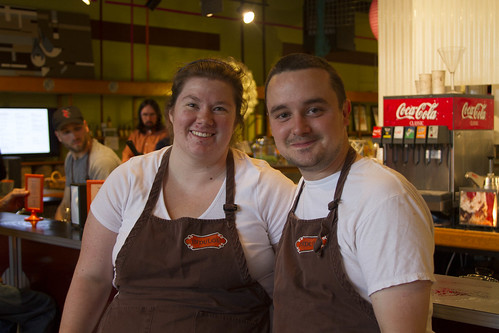 Crystal and JonathanHendrix, co-owners of Indulge Ice Cream Parlor & Café, have seen business boom on Wednesday nights thanks to the cruise-in.

Theresa Werking, one of the founding board members of the Fortville Action Committee, recalls that summer. “At the time, all we really had downtown was Indulge. Since that time, we’ve added more restaurants, stores, bars and even benches for the cruisers to sit on.”

Bringing people, who in turn bring dollars, to Main Street in Fortville has helped the Mayberry-esque town grow. In the last few months, 5 de Mayo Mexican Restaurant, Sunrise Donuts and R-Smokehouse BBQ have both opened to an anxious Fortville following. And as for the cruise-in, Wednesday night business is booming, thanks to the car enthusiasts and spectators descending on the town.

“Wednesdays are now one of our busiest nights of the week,” explained Jonathan Andrew Hendrix, co-owner of Indulge Ice Cream Parlor & Café. On any given Wednesday night, Hendrix explains that they will do as much business as they do during other local events like July 4th, Bastille Day or even Winterfest. 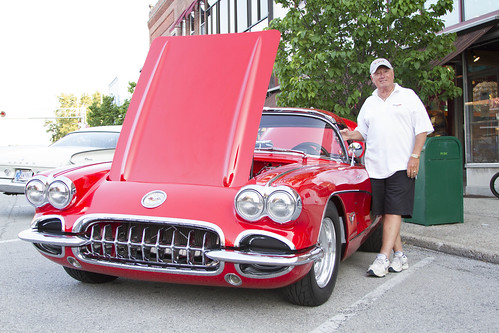 Car buffs from all around start arriving around 3:30-4 p.m., picking out their parking spots along Main Street. They pop their trunks, pull out lawn chairs, photos or other memorabilia, and sit and talk with other car owners or spectators just walking by. Wanamaker says that the cruise-ins are therapy for classic car buffs like himself.

“We go to these cruise-ins to talk about our cars, trade parts, talk to each other, sell parts, seek advice and even seek help,” he said with a laugh.

To that end, every car has a story. Walking around and striking up conversations with the owners is the highlight of the cruise-in for a non-classic car owner. Parked in front of Indulge was a beautiful 1960 Corvette owned by John Rash. He purchased the car in 1968 for $200 and drove it for 20 years. Then, in 1988, he decided to turn it into a show car. “It’s won over 900 trophies at every car show you can imagine,” Rash explained.

Today, he visits Fortville on Wednesdays because of his family connection to the area. As it turns out, his relatives owned farmland in Fortville, so he’s always bumping into cruise-in fans who have a family story to share.

“The cruise-in brings a lot of people to town on a weekly basis—new people who have never been to Fortville before. It’s definitely great for economic development and it shows,” added Werking.

So before the summer ends, make a point to head east to Fortville on a Wednesday night and take in the rebirth of the train town with dinner, drinks, some shopping and, of course, ice cream.

Tom Britt is the founder and publisher of the Towne Post Network, Inc., a franchise system based in Fishers, Indiana.