Erica Carpenter grew up with a father who was a picker before the phrase was even coined.

“Dad was always interested in junk,” Carpenter says. “We would drive by a garage sale and he’d whip the car around to see what they had, which as a teenager was mortifying. Now I’m doing the same thing to my teens.”

Living more than 40 years at mile marker 530 on the Ohio River, her dad picked up salvaged signs, old buoys and steamboat whistles. Now, Carpenter is following in her father’s footsteps, having opened fivethirty home in downtown Zionsville in 2012 (20 N. Main St), a store that sells previously used treasures at a bargain price. Fivethirty home, named to honor her dad, carries a large selection of art, secondhand décor and repurposed and custom furniture.

Carpenter, a Zionsville resident since 1997, began painting furniture when her children were young.

“It was my therapy as well as a way to get out of the house and enjoy an occasional occupation,” says Carpenter, who paints and repurposes furniture into industrial chic or contemporary rustic. “Sometimes people have a piece of furniture that fits well in their space or has sentimental value, but they want to update it.”

Carpenter’s husband, Jim, builds and fixes items, making them the Chip and Joanna Gaines of the Zionsville community.

“I joke with my husband that if we were better looking and our children were better behaved, we could have our own show, too,” says Carpenter, referencing HGTV’s hit show “Fixer Upper.”

Truth be told, the couple is thrilled to be serving the Zionsville community, selling a hodgepodge of unique items, including seating, storage, tables, paper goods, pillows, throws and pop culture pieces, such as large pull-down school maps. Salvaged letters are also popular, as are subway signs and wooden boards. At Christmastime, Zionsville ornaments sell well. Barb Thorp is a fan.

“I love the seasonal items Erica carries,” Thorp says. “But the Zionsville-themed décor are my personal favorites. I love the way Erica celebrates, supports and contributes to our community.” 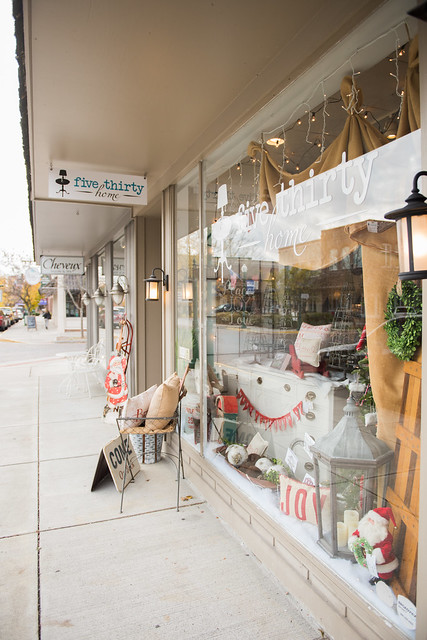 Carpenter admits that it can be difficult running the business, volunteering for the Chamber of Commerce (she’s on the Christmas in the Village Committee) and taking care of her four sons — Grant (7), JD (10), Griffin (13) and Evan (15).

“I’ve got a lot of plates spinning in the air,” Carpenter says. “Sometimes one of them crashes to the ground.”

But she’s not complaining. She feels fortunate by how the residents of Zionsville have embraced and supported her family business.

Mollie Callahan says that walking into fivethirty home reminds her of everything she loves about Zionsville — an abundance of charm, friendly faces and genuine kindness. Amy Morrison agrees.

“Fivethirty home has been a wonderful addition to Main Street in Zionsville,” Morrison says. “Erica assists customers in turning their houses into homes.”