Fishers
Home›Indiana›Fishers›They’ve Got Spirit, Yes they DO!

They’ve Got Spirit, Yes they DO! 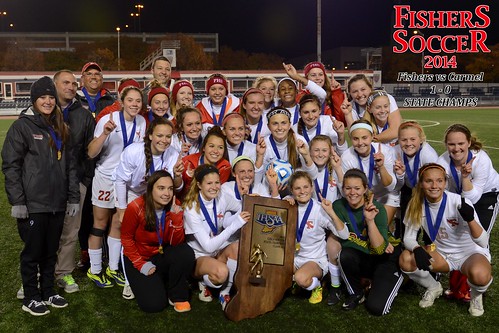 The IHSAA Girls 2A soccer State Finals held at IUPUI Carroll Stadium Nov. 1, capped the day of four state final soccer games. The Fishers High School girls arrived on the field for the warm-ups to their unofficial anthem, “Roar” by Katy Perry, blaring from the speakers. There were smiles of approval on the song selection by the players and a few dance moves, confidence abound.

The student section for FHS more than doubled that of their opponent, Carmel High School. Knowing that Carmel is twice the size of Fishers, this is a compliment to the supportive atmosphere at FHS. The student section was littered with FHS letterman jackets from swimming, cross-country, track, boys soccer, lacrosse, and football. The cross country team ran their state meet in Terre Haute earlier in the day, finishing No. 12 in the state, so they made their day extra-long by attending the soccer game. The FHS football team lost a heart breaker the night before to Carmel, so it was a testament of their character for all of these students to have shown up for this game to support the girls soccer team.

At kick off, the FHS student cheer section started with a “we’re ready” chant, which starts with all of them crouching, arm-in-arm, knees bent, moving side-to-side. The Carmel side, which was diminutive, attempted cheers, only to be drowned out by FHS students chanting at an impressively high volume, “WE CAN’T HEAR YOU!”

Both teams had strong performances, with most of the credit given to the defensive lines. Throughout the game, the midfield and front lines were strong, but the defensive lines held strong with all shots on goal coming from outside the 18, or the outer edge of the goal box. FHS seniors Maddie Peebles and Hannah Hinshaw, as well as juniors Alyssa Baker and Courtney Hodge held their attackers just short. 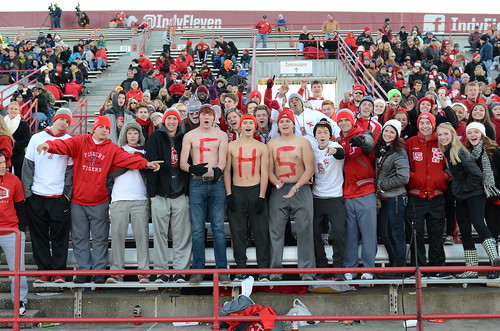 The deciding moment occurred in the 11th minute, FHS freshman Gretchen Mills nailed a beautiful shot from the edge of the 18 into the opposite corner of the goal. A perfectly placed shot, the Carmel goalkeeper never had a chance, although she did knick it with her fingertips as she spun mid-air.

The student section chanted, “SHE’S A FRESHMAN!” and the Tigers were up 1-0. The fans would not see another goal for the remaining 69 minutes of play.

Midway into the second-half, a Carmel offensive player attempted what looked like a clean break away. The Tiger defense again answered the call with Alyssa Baker thwarting her efforts, giving the Carmel forward a weaker shot, which was caught by FHS goalkeeper Hannah Sullivan. The FHS student cheer section yelled, “NOT SO EASY”. This was the closest Carmel got to level the game until the 50th minute, when a free kick bounced off the post. This was an interesting moment. Sullivan uncharacteristically stayed planted on her feet and didn’t move. The ball bounced off the crossbar and the FHS fans and players knew in that moment that they were going to win the state championship.

The constant chanting with quick wit from the FHS students held up consistently throughout the game. They were truly the 12th man, or 12th girl, as was the case in this game. The sense that the cheering students got into the heads of the Carmel players was palpable. The 12th girl was too much for them. Especially with the CHS kids singing nursery rhymes, such as “ABC song” and “Twinkle, twinkle little star”, to which the FHS kids responded with, “WE’RE IN HIGH SCHOOL!” 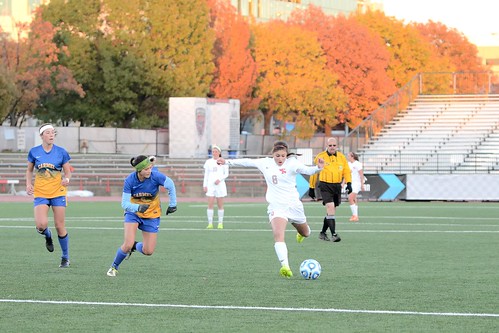 FHS freshman Gretchen Mills kicks the only goal of the match.

The favorite cheer of several of the FHS players during the game was “THANK YOU, WHEELER.” This was an homage to Strength Coach, Randy Wheeler, and chanted after some amazing moves by FHS junior Riley. Riley, who has committed to Purdue, broke through three defenders and was not easy to take down.

FHS student section did cheer a few of their classics, such as “We are The Tigers, the mighty mighty Tigers” cheer, ending with “ooh, aah, ooh, ahh”. These tireless supporters remained on their feet for the full 80 minutes of play. When the students would calm down in their cheers, the parents and fan section would stomp on the bleachers, which would earn smiles from the students. From the start of the game, the student cheering section were into this match as any major rivalry of football or basketball game.

Clearly, the 12th man, had an impact. And fans couldn’t help but notice that the last 20 minutes of the game, desperate Carmel players were flopping everywhere and with three minutes left, there was three different players down simultaneously on various parts of the field begging for a foul.