Remember when dining out in Greenwood during the 1970s was limited to a few restaurants: MCL Cafeteria, Jerry’s and Pete Steffy’s? Now we have an abundance of choices. Not many have personally experienced the evolution in Indy’s food service industry over the past 40 years like Chef Bricker, Chairman of Hospitality Administration at Ivy Tech Community College. 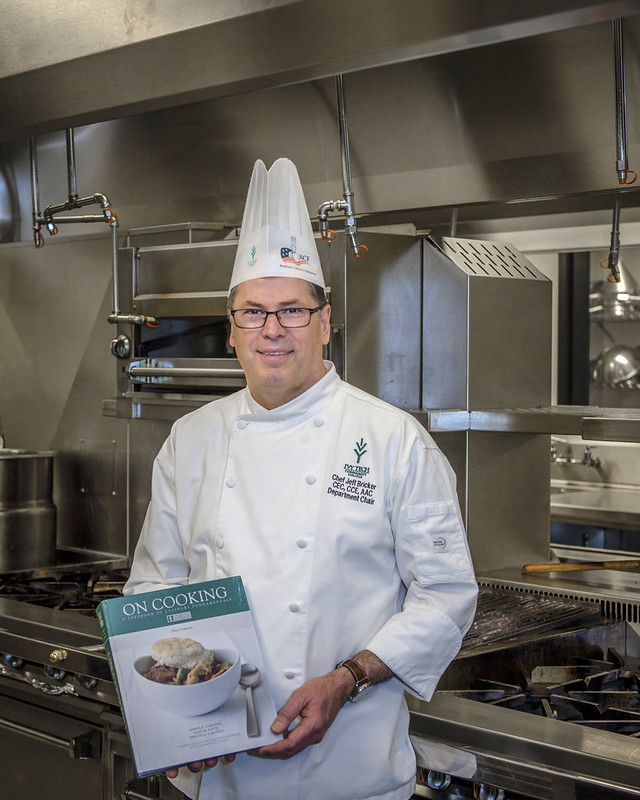 Center Grove resident Jeff Bricker began working at a family owned Kentucky Fried Chicken restaurant at age 15. He continued working there after graduation in 1977 from Perry Meridian. Then a couple of years later, he enrolled at IUPUI’s School of Business for accounting, planning to veer away from food service. But when his parents bought the franchise rights to another quick service restaurant, Potatoes Etc., opening the first at the Greenwood Park Mall and then three others, he attended corporate training to become operations manager.

Jeff soon became District Manager, overseeing all of their restaurants. But he was intrigued by a request from Steve Pfendler of P.I.P.E., Inc. to cater a corporate event for 100 people. Without a catering space, he used what he had, the kitchen at Potatoes, Etc. and served the meal at one of the buildings Pfendler owned in downtown Greenwood. It proved to be a success, and Jeff became hooked on catering as more requests came his way.

In 1987, he and wife Lynda opened The Columns on Main Street in downtown Greenwood, a full-blown banquet room facility. Lynda managed the accounting, scheduling and serving, and Jeff became fully immersed in food preparation all the while feeling that he wasn’t quite prepared for it. He enrolled as a part-time student in Ivy Tech’s culinary program and finished four years later. Their business continued to grow during this time as they expanded it to include catering for the Grafton Peak banquet facility and dinner food service three nights a week, plus catering special events at Royal Oak Golf Club (now Dye’s Walk).

During Jeff’s time as a student, he took a summer intensive Classical French Cooking program from l’Ecole de Cuisine La Varenne in Burgundy, France, under the direction of Chef/Author Anne Willan. With new inspiration, they opened The Colonnade Room in 1998, a small fine dining room in the building they purchased from Steve Pfendler which housed The Columns. They served a seasonal menu of fresh ingredients in multi-course dinners paired with wines. Bricker says they “stuck out like a sore thumb” because it was ahead of its time food trend-wise, although it gained attention from Indianapolis Monthly Magazine which recognized them with an award-winning white chocolate crème brulee.

TURNING THE TABLE
Bricker then agreed to teach a Monday morning baking class at Ivy Tech. But the 80-hour workweek started to take a toll. Even though he enjoyed the food service industry, the hours and the demand were unrelenting. He was feeling frustrated with life and was ready to make some changes. Ivy Tech offered him a full-time culinary teaching position which he accepted. He put his businesses up for sale and fortune smiled as someone offered to purchase them as a package: The Colonnade and The Columns real estate and Royal Oak food service.

In 2002, he began teaching full-time at Ivy Tech. Part of the requirement for his new job was continuing education. So in 2004, Bricker received a bachelor’s degree from Indiana Wesleyan in Business Administration, and in 2006, he earned a master’s degree from Ball State in Adult and Community Education with a focus on teaching adults. He knew teaching at a community college was a good fit, and Ivy Tech realized it too.

In 2004, Bricker became the Program Chairman over Hospitality Administration at Ivy Tech which includes culinary arts, pastry arts and hospitality management. He loved working with students, advising them on a career path as they acquired skills and carved out a future. He enjoyed the different backgrounds and cultural diversity of the students and knowing what Ivy Tech offered in the food service industry could help people make a better life for themselves. 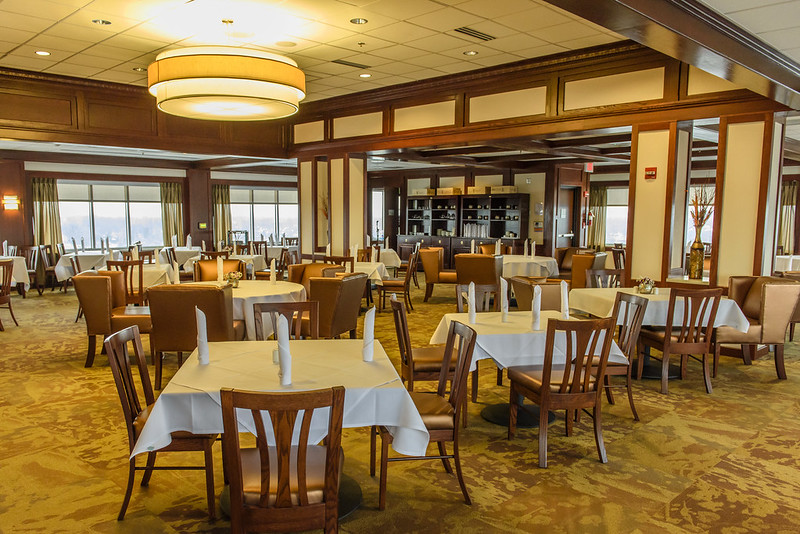 SERVING THE COMMUNITY
When talk of Lucas Oil Stadium began, Bricker knew Ivy Tech needed to ramp up their program to accommodate the influx of people expecting great hospitality in Indianapolis. Bricker began to scout for suitable sites, so the program could grow. Seven years later with five prospective sites and just when Bricker was “burnt out on the process,” they received a call from the Lilly Endowment offering a $22.9 million grant to remodel the old Stouffer’s Hotel on North Meridian Street to expand their campus, including the hospitality program.

Since they’ve moved into the Stouffer’s Building, the Hospitality Administration program has grown from 220 students to the current enrollment of 800 students. There are eight training kitchens that allow those students to train to fill some 4,700 jobs in food service management in the Indy area.

Students also get the experience of performing their newly acquired skills in a restaurant called Courses where the restaurant is the classroom. It is on the 13th floor of the former Stouffer’s Hotel in the remodeled Ramsgate Restaurant of the 1960s, offering “the best view of the city.” The menu is Classical French and International cuisine. On the first floor of the old hotel, students in the pastry arts program also operate a Bakery/Café. Bricker’s staff includes six full-time and 35 part-time people, including longtime faculty member Lauri Griffin who has been a strong supporter throughout this journey. 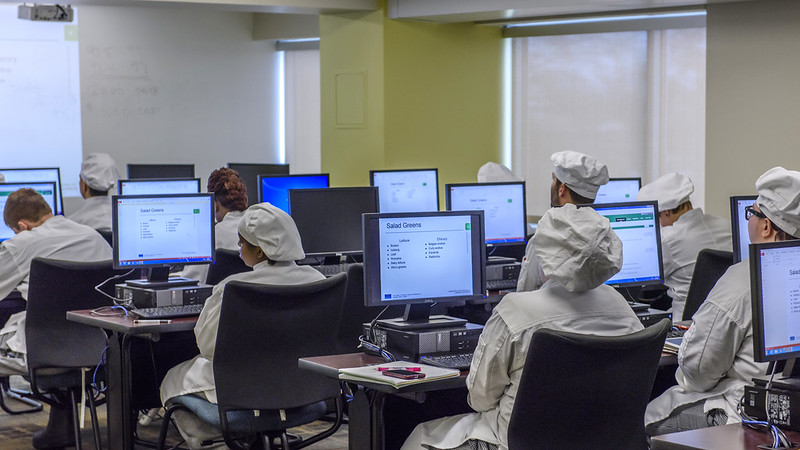 WASTE NOT, WANT NOT
As Indianapolis grew in food service offerings, a new problem emerged: food waste. Bricker began to serve as a board member for Second Helpings, a food rescue and hunger relief program. Each day, 4,000 meals are served to 70 United Way agencies as they rescue food donated from restaurateurs, retailers and wholesalers and safely prepare meals, preventing unnecessary waste and offering solutions beyond the obvious. They also offer a 10-week culinary job training program to disadvantaged adults for careers in food service, eliminating hunger at its source.

CHEF BRICKER’S FUTURE
Two years ago, Bricker had a “health reality check.” He was 35 pounds overweight and knew he needed to make some changes. He sought the professional advice of Dr. Leanne (Schlueter). She turned him into a food label reader, and he became more aware of good nutrition. Fortunately, the food industry had also begun to swing toward offering healthier fare, making healthier choices more available. But one thing he had trouble finding was a truly healthy salad dressing.

While searching for healthy salad dressings, he came up with his own based on a favorite from his days in catering. His children and students encouraged him to bottle it, and he began to sell it at farmers’ markets. Purdue Food Sciences evaluated it, and it is labeled as non-GMO oils (genetically modified food), low sodium, no sugar or artificial sweeteners.

The results are three tasty and nutritious salad dressings under the label of Brick House Dressings. He procures the ingredients, assembles them in a shared commercial kitchen and has them bottled at a Food and Drug Administration-inspected facility on the westside of Indy. They are sold at the “Indiana Grown” kiosk at Kroger, Georgetown Market, R2Go Market, Green Bean website and Tiny Footprint, distributing local and sustainable foods throughout the Midwest.

FINDING BALANCE
Bricker’s life has been a busy one as he’s carved out a path in the ever-expanding food service industry. Getting away from food and finding ways to relax is difficult in a society where food commands attention.

He enjoys occasional afternoon concerts with friends and a bottle of wine at Mallow Run, but his best escape is on the golf course where only the ball commands his attention.