There’s much about Warfleigh Barber & Supply Co. on Broad Ripple Avenue that just screams distinctiveness. As a shop primarily for men, it’s located in an area replete with salons and boutiques geared toward the female market.

In addition to offering haircuts, beard trims and shaves, it carries some of the most hard-to-find male grooming products in the biz. Even Warfleigh’s beginnings are rather unique. Its original location was a 215-square-foot space formerly occupied exclusively by a few vending machines and ATMs.

In 2015, owner Matt Jones was working as a general manager for Rob Sabatini, proprietor of the Mineshaft Saloon, Rock Lobster and Average Joe’s Sports Pub, and noticed the lack of men’s specialty gift stores in the Broad Ripple area.

“I wanted to open up a small store that was kind of a focus toward men, with pocket knives, writing instruments and leather goods,” says Jones, a Maryland native who moved with his family to Indianapolis in 1996. “I felt like there were enough shops in Broad Ripple for women’s stuff – women’s boutiques, women’s jewelry shops and everything. So, I just wanted to have a little sliver of a gift shop.”

Jones also recalled at the time that his own barber, Cody Potter, was looking for a new setting to ply his trade. They came to an agreement. Potter would bring a decent clientele to Jones’ new shop if Jones agreed to include a barber chair. By March 2015, Jones’ gift shop idea had become a full-blown – if modified – reality, and Warfleigh Barber & Supply Co. was born in a comparatively miniscule space nestled in the heart of the main Broad Ripple Avenue strip.

The name is as old-school as the shop’s visual vibe. It comes from the nearby neighborhood technically located west of College Avenue, and Jones says the Warfleigh district used to include the area where his shop sits, according to a city map from the early 1900s.

“It was insane. Cody had a little client base for himself, and we started getting some new clients and started backing up to two and three-hour waits,” Jones recalls. “Things got crazy, so we decided to expand a little bit, and we added another chair and another barber. It made me appreciate small retail spaces. If you have a good location, like on Broad Ripple Avenue, many people just walk right in the door without any advertising.”

While priding themselves on offering traditional haircuts, beard trims and shaves, the Warfleigh barbers consult with each client on their specific preferences, no matter the age (skateboard decks are used as booster seats for youngsters). As a walk-in-only establishment, the staff strives to make waiting times pleasant for customers, with ice-cold beer available and shelves of specialty products to peruse. Discounted haircut prices are given to seniors, veterans and active military, police, fire and medic personnel.

Alongside novelty goods like writing instruments and pocket notebooks, the shop carries head-to-toe grooming items including shampoos and conditioners, shaving soaps, cologne and toothbrushes. Jones says most of the products are all-natural, and all are animal cruelty-free.

“In the cosmetics industry, you’ll find that a lot of the cosmetics are tested on animals,” he says. “We want to make sure that all of our products are ethically sourced to the best of our ability. We also use things that don’t harm the environment. Those are things that resonate with us and who we are as people.” 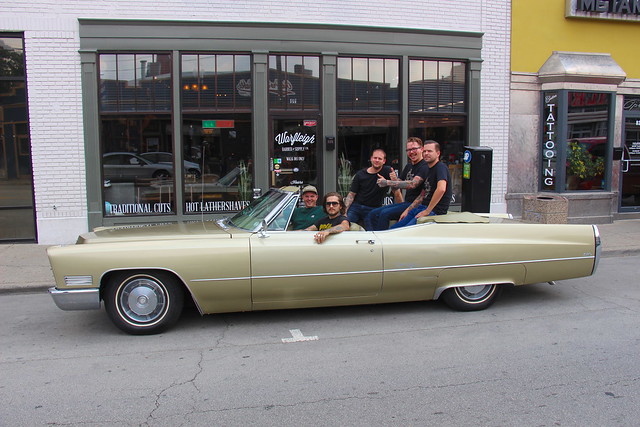 By late spring in 2016, Jones and Potter had hired a third barber and relocated a few doors down into a much-needed larger space previously taken up by the Rock and a Hard Place General Store. With a client base that has continued to grow steadily, the shop now employs five barbers, and Jones says seeing customers leave with smiles on their faces is what makes the endeavor worthwhile.

“With a barber shop you get to deal with people’s image and self-esteem, and I think that’s something that is really cool about being in this business,” he says. “Some guys come in and get a haircut and it gives them the confidence they need to leave there and do what they have to do, whether it’s landing a job or popping the question or something like that. I think that’s one of the coolest things, to help people look their best to get out there and capitalize on whatever they’ve got going on in their life.”