After years of hearing stories about Winston Knauss, it was time to debunk the myths that surround conversation of this man. These seemingly tall tales of flying a helicopter or an airplane under the Keystone Ave. bridge, pulling water skiers from a helicopter along the White River and building his own yachts behind his house seemed a bit far fetched. Or were they? It turns out that all of these stories are true. In fact, Winston produced evidence to support most of his shenanigans.

It is true that Winston’s company imploded buildings with more efficiency than other demolition companies which enabled him to live a life that he wished to live. At a young age, Knauss knew he was responsible for himself and his career. After leaving his parents’ home at the age of 18 and living out of his car, he worked fast and furiously to create a successful business.

Working hard and surrounding himself with good people, his demolition company, AAA Wrecking, is best known for imploding two buildings at once, the Summers Building and the Lincoln Hotel in 1972.

“This enabled an entirely new city clock for the City of Indianapolis,” says Winston who is shown in a photo at a podium with then-Mayor Richard Lugar, Congressman Bray and Bud Tucker seated to his right. 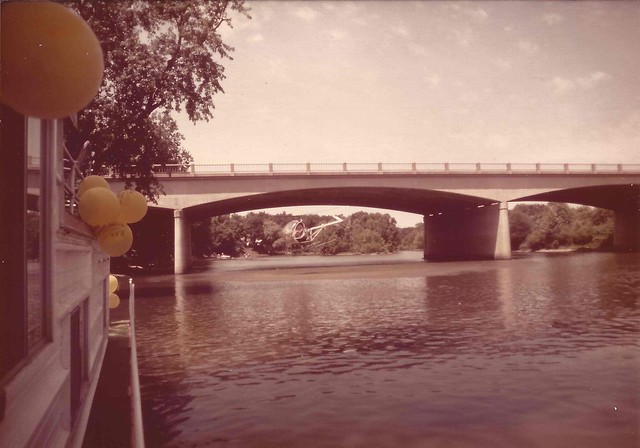 An avid aviation enthusiast, Winston took to flying as a hobby. Knauss and the stories of him pulling skiers along the White River from his helicopter are more than rumor. He frequently flew his helicopter under the Keystone Bridge over the river which gave him the best landing opportunity on his helipad at his home on the White River.

“As long as there was no crosswind, it was ideal,” confesses Knauss of flying under the bridge.

In the early ’80s, Winston gave his demolition business to his employees who had been with him the longest and went about building and chartering yachts for his next act.

“When Winston decides he is going to do something, he goes all in,” shares Winston’s wife, Diane.

His boat building began as a hobby in his backyard along the White River. He would complete construction on a boat and decide he wanted one bigger, so he would sell the others and build another. Winston doesn’t skimp on his construction materials, so each boat is highly sought after since he has built them to last. All of the yachts are shortterm cruises for dining and parties; there are living accommodations on board intended for crew only.

The yacht Winston constructed on his lake off Westfield Boulevard is now serving passengers at the North Hudson River Yacht Club in New Jersey. In fact, Winston’s yachts reside all over the world in Shanghai, Mumbai, San Francisco, Marina Del Ray, Miami and five in New York City. Winston has sold all of them except for the two in Miami that he owns and the new one under construction in Green Cove Springs, Florida. The latest addition will be his 32nd yacht. 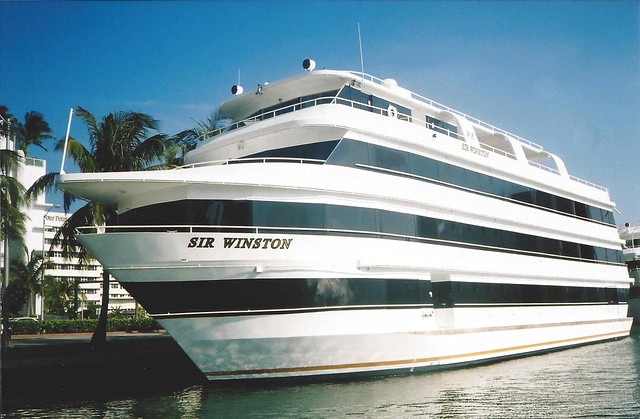 When Winston is faced with a challenge, he calls in expert assistance from his friends like when Liza Minelli and her entourage wished to charter his yacht in Fort Lauderdale. “Normally I was not in charge of food. There would be a caterer, and my job was to captain the boat,” says Winston. “Liza’s assistant put me in charge of their food as well as the charter to show them the waterways. I called a buddy for advice.”

Winston’s friend that he reached out to was Jug’s Catering founder Charles “Jug” Eckert. Winston asked Jug for help. Eckert advised him to purchase stone crabs, buy the best of all the food he could find and shared with him what to charge. Confident with the advice, Winston went to work. The end result was a repeat customer.

During the Super Bowl when the Colts beat the Bears, Colts owner Jim Irsay chartered Winston’s yacht, hosting a capacity crowd. One year for the Fort Lauderdale Winterfest Boat Parade, Ryan Hunter-Reay was the Grand Marshall aboard Winston’s yacht. Built for entertaining, the yacht is large enough to seat 240 passengers in one dining room and another 120 in an adjacent dining room.

Winston’s shipyard company, located along the St. John’s River in Florida, just started the framework on his latest ship. It will measure 132’ in length and six stories high above the waterline. The ship will accommodate 575 guests for dinner, and 30 crew members will have living quarters on board. Guests enjoy four hour charters. Construction will be completed in 2017.

Feats of aeronautical daring, demolition explosions and large yachts built for entertaining all describe how Winston has lived: out loud. According to his friends, his heart is the biggest thing about him. 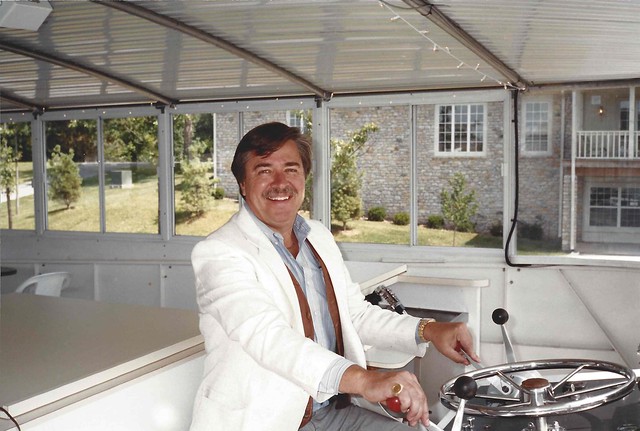 “He’s all fun like a kid,” says longtime friend Brigitt Caito. “Our kids just love him, and now our grandchildren do too. Winston is all about having fun, and he enables those around him to have a great time too.”

“One time, years ago, we took the kids on vacation to visit Winston in Florida,” shares Brigitt’s husband Philip. “He picks us up and all of our luggage in an Excalibur Roadster. With four kids and the luggage piled on that convertible, we looked like the Beverly Hillbillies!”

Six years ago, Winston, along with his wife Diane, and a flight instructor were involved in a helicopter accident at the Fort Lauderdale Executive Airport. The only sustained injury was to Winston’s left eye. Due to this injury, Winston no longer flies his aircraft nor steers the yachts. For the record, the FAA accident investigation concluded the accident occurred due a faulty part on the helicopter.

While Winston may not be behind the wheel of his yachts, he certainly enjoys the ride, and everyone on board is guaranteed to have a good time!