A World Traveler With National Political Interests and a Love of his Local Roots. 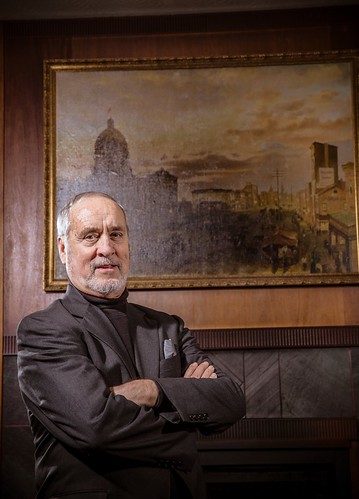 Looking closely at the painting behind Gary Hofmeister, which is an original influenced by turn of the 20th century Indianapolis, you can see a building on the right with “Hofmeister Jewelers” advertised along the side. In actuality, Hofmeister started his jewelry business 42 years ago in 1973, not in 1903, as the painting suggests.

“I commissioned that painting while in Russia,” shares Hofmeister. After the fall of the Berlin wall, Hofmeister was part of a contingency who spread capitalism throughout the former Soviet Union. He spent the better part of ten years traveling back and forth to Russia hosting seminars on democratic capitalism.

In researching Hofmeister’s days spent in the former USSR, Indianapolis Business Journal wrote an article on his Russian exploits in August, 1994. The last sentence of this article reads, “Since the entire emphasis is on ‘hands on’ experience vs. theory, only genuine entrepreneurs are invited.”

Genuine is a word that describes Hofmeister perfectly. The national organization that he was affiliated with at the time, did so by private donor funding, mostly with the presenters paying their own way.

“It was an exciting time in our history, and I wanted to be a part of it,” says Hofmeister of his trips to Russia. In addition to seminars, Hofmeister practiced his capitalistic ideals by buying a trove of artwork while in the former Soviet Union, which proudly adorn the walls in his bed and breakfast, the Old Northside Bed & Breakfast.

Although Hofmeister claims “brain damage” as his reasoning for buying a bed & breakfast, this couldn’t be further from the truth. Hofmeister loves the Romanesque revival home built in 1885 by Herman C. Dewenter that is now the Old Northside Bed & Breakfast.

Always up for a challenge, Hofmeister dug right into restoring this hidden gem on the Old Northside when he purchased it 20 years ago. He takes pleasure in caring for and managing the bed & breakfast. Given Hofmeister’s deep appreciation of history, maintaining the Dewenter-Greenen House is one of the ways he expresses his love of preservation. 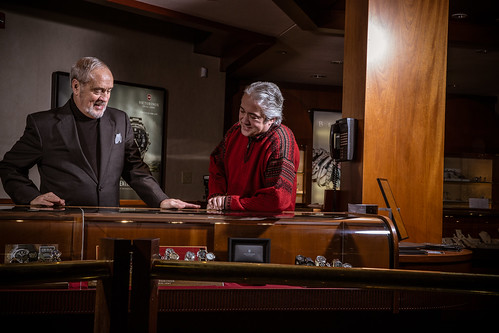 Hofmeister grew up in Broad Ripple, across the street from Christ the King. He attended Cathedral High School, graduating in ’59 and had every intention of going into the Navy after graduation. “I thought college was expensive and knew my family couldn’t afford it, so I wanted to follow my dad by serving in the Navy,” shares Hofmeister. During his senior year, however, those plans changed.

“I accompanied a dear friend, Father Schmidlen, to visit a friend of ours in Terre Haute who was at a half-way house for reformed criminals, after getting into some trouble,” recalls Hofmeister.

The half-way house was a rectory run by Father Powers who looked after the men. Hofmeister had a frank conversation with him, where he was asked about his future plans. Upon sharing his military vision, Father Powers convinced him that college could be affordable. Father Powers offered Hofmeister the opportunity to live at the rectory, get a job and attend Indiana State University. Hofmeister enthusiastically said, “OK.”

It was in that moment that Hofmeister’s plans changed. “All of a sudden, in this five minute conversation, my life was changed. I owe him everything.”

While majoring in pre-law and foreign languages, which were French and Spanish, Hofmeister worked in a slaughter house cleaning up. During a temporary work hiatus during his junior year, Hofmeister seized the unexpected opportunity to audition and perform in the musical, “The King and I.” He landed the second male lead. It was Hofmeister’s debut as a stage performer.

During Hofmeister’s senior year, he was cast in a USO show, “Seventeen.” After graduation, Hofmeister toured with the Broadway production of “How to Succeed in Business Without Really Trying,” as an understudy to a mailroom worker, Twimble.

Always having wanted to play the role of Finch in “How to Succeed,” Hofmeister finally got the chance during the 1968 season at Footlight Musicals.

“Gary was great,” recalls fellow cast member Robin McDowell. “We had so much fun that summer!” 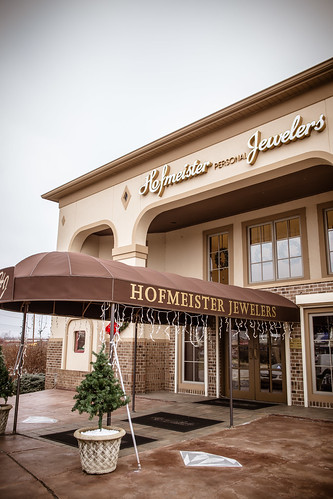 Realizing that musical theater wasn’t perhaps the most lucrative way to earn a living and provide for his young family, Hofmeister changed his profession. He managed a nursing home for a while. But after gaining experience selling engagement rings on college campuses, Hofmeister Jewelers opened a small shop in The Marott Hotel. “My prior employment history prepared me for being an entrepreneur,” shares Hofmeister.

An interest in politics percolated while in college. After working for an extended period of time at the second location of Hofmeister Jewelers in Steamboat Springs, CO, Hofmeister and a couple individuals founded a political group. Along with attorney Rick Akin and his CPA wife, Jennifer Schubert-Akin, Hofmeister started the Steamboat Institute. Motivated for change, Hofmeister dusted off his public speaking skills as the Republican nominee running against Julia Carson for Congress in 1998. Hofmeister remains active in national political circles.

“He lost because he tells the truth and wouldn’t back away from that,” shares Hofmeister’s son, Carter.

After the challenge of a political campaign, Hofmeister looked for his next grand adventure. Never far from his heart is his love of music. For ten years, Hofmeister hosted a couple different radio shows. One was a political talk program and another was on NPR and called “Broadway Memories: Music and the Stars.” He co-hosted with friend, Bob Young, longtime general manager of Starlight Musicals.

Hofmeister remarried fourteen years ago to JoAnne Carmony, a realtor from Fullerton, California. The two met at a wedding in France. Hofmeister was a friend of the groom, California Congressman Dana Rohrabacher, and Carmony was the mother of the bride. And after a three-year courtship, the two were married and now split their time between California and Indiana, plus several states in-between.

With interests in musical theater, national politics, a bed and breakfast, a family jewelry business that now has two locations and three generations of his family employed, there is ample opportunity for the attentions of Hofmeister. He hails from a family where passions are encouraged to be explored. This is the legacy of the Hofmeister family, since immigrating to the United States in 1855. Certainly, Hofmeister has pursued his. Having traveled to 108 countries, and all 50 states, he is never far from his Broad Ripple roots.