Congratulations to Geist’s Own Bob Kevoian

It has been a bittersweet time for fans of the “The Bob and Tom Show” on WFBQ-FM 94.7.

In early November, the popular radio duo, based here in Indianapolis but syndicated nationwide on more than 100 stations, was inducted into the National Radio Hall of Fame at the Museum of Broadcast Communications in Chicago. It was a great moment for all, but as Bob accepted the award, he also announced his retirement!

“I always thought you had to die or be retired to be considered for the Hall of Fame. Thank God, I’m not dead, but I am going to retire at the end of the year and walk away from the mic.”

A lot of us knew this day was coming, and listeners were somewhat prepared as Bob took several “vacations” throughout the year.

But to actually hear him say the words “walk away from the mic” was still a little shocking to many.

We want to say congratulations to our Geist area neighbor on his success and his retirement! I know I am proud to say I had the opportunity to work with “The Bob and Tom Show” and collect several Marconi Awards during my time with them in the ’90s! “The Bob and Tom Show” hit the air waves here in 1983 and went syndicated in 1995.

Bob will continue to be heard on the show with the number of recorded bits they play featuring his famous laugh and the more than 50 comedy albums they have produced together over the years.

In the meantime, the other half of the famous duo, Tom Griswold, says Bob will always be a part of the show, and his presence will continue as they broadcast for years to come.

As they say in show biz…the show must go on. 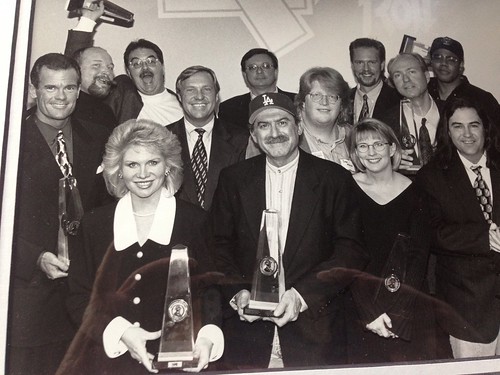