Back for Round Two: Assistant Curator Values Shared Experiences

On a balmy Saturday morning in June, Roseanne Winings was helping to ready the stage of the Tobias Theater at the Indianapolis Museum of Art (IMA). But she wasn’t organizing a performance; she was hosting a meal.

The special program Avant Brunch combined an exclusive five-course meal from a local chef with the listening of new music, offering its 50 participants a shared experience of taste and sound. The event was just one of Roseanne’s many responsibilities as Assistant Curator of Audience Experience and Performance at the IMA.

Roseanne grew up on Indy’s northside, graduating from North Central High School. She attended two years of business school at IU in Bloomington but longed for the freedom to explore creatively. “I am incredibly grateful for the experience in business, but I found myself gravitating more toward the art world,” says Roseanne, who grew up frequenting museums. 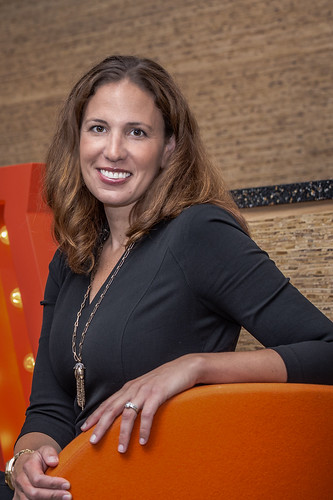 After switching her major to art history and graduating with her BA, Roseanne stayed for graduate school at IU and received her Master’s in Art History and Journalism. During her final year in graduate school, Roseanne worked for the School of Fine Arts Gallery at IU and began making the connections that would lead her back to Indianapolis.

In 2005, Roseanne and her husband moved to Broad Ripple and then to Meridian Kessler, and she began working as Assistant Project Manager for Public Art Indianapolis, a city-funded art initiative. “That was my first real grownup job,” says Roseanne, who helped coordinate the public exhibition of bronze sculptures by Tom Otterness. Three sculptures still remain just outside the Indiana Convention Center.

“I was definitely part of a team,” says Roseanne, who worked with structural engineers to reinforce sidewalks and the artist’s gallery to manage the sculptures coming to Indy.

As Roseanne’s work continued, her plans changed again. During a meeting, she found herself sitting next to her future boss. “We got to talking about the work I was doing, and a couple of months later, I was hired by the IMA,” says Roseanne.

Roseanne began her career at the IMA coordinating programs for adults. By the end of her first tenure from 2005-2010, her title had changed to Manager of Exhibition and Collection Programs. In 2009 when the IMA opened the European Design Collection, Roseanne and her team worked to bring the 20 European designers to present on their art and conduct conversations with each other and the public.

In 2010, Roseanne stepped back from her position at the IMA and taught in the honors department at Butler University. After the birth of her two children, Roseanne finally returned to the IMA in January 2014 as the Assistant Curator of Audience Experience and Performance. 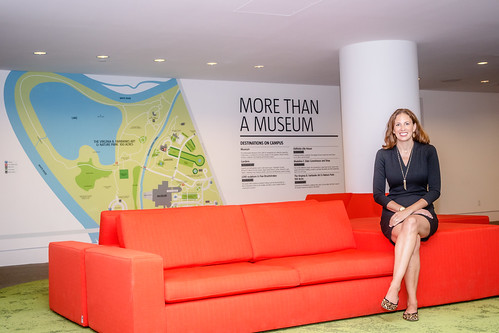 Roseanne and her team research, create and implement various programs at the IMA. Working with artists, food vendors and musicians, Roseanne helps to organize events like the Solstice and Equinox celebrations and ArtPrize Pitch Night where five local artists competed for $5,000 to execute their projects at the fall ArtPrize competition in Grand Rapids.

Now as fall approaches, Roseanne prepares for two big events. In September, the IMA will host the international MuseumNext Conference which focuses on the future of museums. In October, the Project IMA: Cutting Loose Fashion Show will feature a runway fashion competition. The IMA is currently accepting designs.

“I feel really lucky that they had me back for round two,” says Roseanne, who values her everyday events and encounters. “In my career, I’ve worked on projects with geologists, hip hop artists, engineers, whirling dervishes, city planners, film makers, architects and fashion and furniture designers, among others. Where else can so many different minds come together to create shared experiences?”

Making a Difference One Room at a ...