For those who have volunteered or been a part of Indianapolis area Boys & Girls Clubs, the name Mark Branch is likely a familiar one. Branch first started volunteering at Boys & Girls Club back in the early 80s. He quickly realized that the organization played a crucial role in children’s lives, and he wanted to continue being a part of that positive impact.

“A friend of mine that had been volunteering suggested that I do the same,” Branch recalls. “I really got hooked and interested in the kids and serving.”

After volunteering for a while in Lebanon, it wasn’t long before Branch got a call about an opening as the program director of the Indianapolis branch of Boys & Girls Club. He jumped at the opportunity and later became the Unit Director of that branch, where he served for seven years.

“I could tell, six months into the position, that this would be my career for the rest of my life,” Branch says. “I wasn’t quite sure what exactly I wanted to do, but I knew I wanted it to be something with kids. With Boys & Girls Club, I’d found that avenue.”

Branch has served in just about every capacity with the Boys & Girls Club. And, throughout his 35-plus-year-career, only eight years have been away from Indiana. Along the way, his impact has been felt throughout the organization.

Still, Branch missed Indiana and moved back to serve as the Executive Director of the Boys & Girls Club of Indianapolis for seven years, overseeing 22 full-time and 90 part-time employees and 12,000 youth in Marion County.

More recently in 2006, he served on the Boys & Girls Club’s national staff as the Lead Director managing clubs in the Midwest, Southwest and Pacific-West regions of the country.

His latest role is a bit more personal. This fall, Branch was named as the new CEO of the Boys & Girls Club of Boone County — bringing him full circle back to an area where he first started volunteering and serving kids.

Branch is excited about the opportunity and believes his decades of experience with the Boys & Girls Club has prepared him well for the CEO role in Boone County.

“When this spot became open, I really started looking at my career and what I wanted my legacy to be when I retire,” Branch says. “I wanted to be a part of something that got me into this movement all those years ago — the passion for the kids and the opportunity to take a branch that is already doing well and hopefully take it to the next level.” 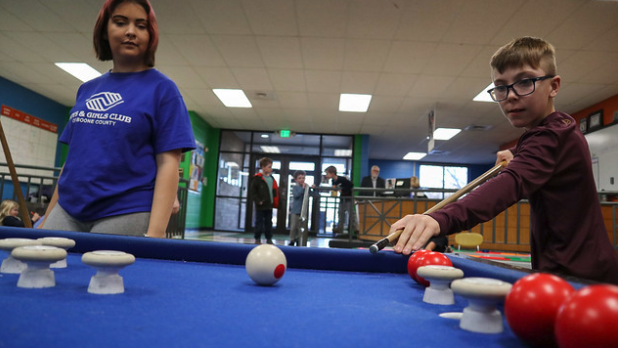 “We are beyond excited to have Mark serving as our new CEO,” adds Board President Rob Schein. “He has a proven track record of strong leadership and has unmatched experience with the Boys & Girls Club. Boone County – and most importantly the youth of Boone County – will benefit from his leadership.”

The job, location-wise, also made sense. Branch and his wife have lived in the Danville area for nearly 20 years and have friends throughout Boone County. The couple is excited to move to Boone County and become immersed in the community this year.

“I have a lot of friends in Lebanon, and my wife and I actually first met there,” Branch adds. “We will put our house up for sale and move up to Boone County this spring, and we look forward to being a part of the community here.”

In just this last year, the Boone County branch finalized a merger that included three unit locations — Lebanon, Whitestown and Zionsville. The branch has seen a significant 60% increase in members over the last decade. All three units serve 450 members daily in before and after-school programs.

At the Lebanon club, specifically, dinner is fed to nearly 100 children, five days a week. All three units also have 3,000 members who take part in sports leagues and summer camps. “These clubs give children a safe place to go and parents an affordable option,” Branch says. “Especially during the summer, when the kids are here and parents are at work. My kids were club kids and loved it. It is a place that the kids have an opportunity to grow and learn, too. This isn’t simply a daycare, we are a youth development organization.”

Branch aims to implement and carry out several goals throughout his first full year. He hopes to launch the club into its next phrase and better serve Boone County in 2020 and beyond.

“I see us building endowments down the road, a capital campaign, and I see an opportunity to expand our services out across all of Boone County,” he says. “We already have strong club programs. We have an amazing quality of staff already, too. Really, I just want to add on to that and develop staff training and development. I want to increase collaborations and outreach as well. There are many opportunities to partner with people and organizations.

“What I’ve learned is if you are doing your job right, when you leave they won’t really miss you because you’ve helped build up such a strong infrastructure and financial base that great, quality people want to continue working there and build upon that.”

Overall, Branch wants Boone County residents and the kids to know that the future is bright for the Boys & Girls Club of Boone County and they will always serve the community.

“This community is blessed to have a great Boys & Girls Club,” Branch says. “This is a place where your kids can be challenged in a positive way and grow up to be productive and responsible people. That is why I am so passionate about it.”

The Boys & Girls Club of Boone County administrative office is located at 1575 Mulberry Street in Zionsville. For more information on all three club locations, visit them online at bgcboone.org or give them a call at 317-873-6670.